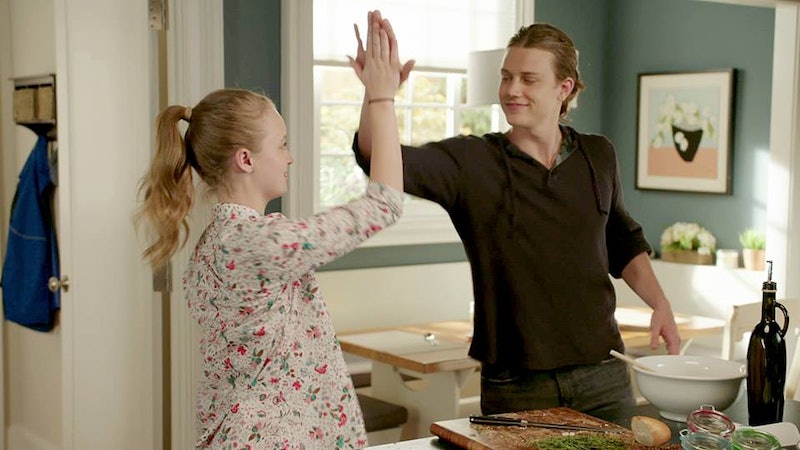 I know, it hurts. It hurts so bad. As I write this I'm still trying to come to terms with what Finding Carter Season 2 could be like without Max while I simultaneously bawl my eyes out. Tuesday night's Finding Carter Season 1 finale broke up Maxlor and potentially sent Max away to live with his parents, but while that's terribly sad, we should be grateful that Max's storyline didn't go as originally planned. Because our lives could've been so much worse. In an interview with Bustle, series showrunner Terri Minsky reveals that Finding Carter Season 1 was built on Max dying in its tenth episode and, thankfully, because we loved him so much, MTV decided that he had to stay.

"The whole season was built around killing Max," Minsky tells me following a story about how Alex Saxon took a five-line, pilot-only character and turned him into the series' fan-favorite. Minsky, much like the rest of us Finding Carter fans, loves Max and she assures me that it hurt her almost as much as it hurt us when she thought Max might actually have to die. The showrunner explains that she and MTV decided "basically in the very first phone conversation about this season that Max is going to die in Episode 10." But why?

Well, when Minsky first wrote the character, he was only supposed to function as a way of showing the life that Carter left behind when she went to live with the Wilsons. But Max quickly won her over. "He was only supposed to be in the pilot so, he does his five lines and it’s like, 'This guy has to come back. He has to come back,'" Minsky reveals about how Saxon turned into a character that appeared in every episode of Season 1. If she loved him so much, how did she go through with the decision to kill him, all the way to the point of giving Saxon the script that detailed his death? Minsky says that she and MTV told themselves, "We’re going to be fearless about it and it’s OK because Max was supposed to be a character only in the pilot."

Those affirmations didn't make it any easier to tell Saxon, though, that he'd no longer be a part of Finding Carter. Minsky remembers the moment she sat down with him and the script. "I sit down with Alex Saxon and I tell him that his character is going to be killed off in Episode 10 and he has – I can’t even tell you what it’s like to look at his face normally – but when it’s sad, it’s like looking into the sun when it’s in eclipse," she says. "It’s impossible. You can’t even bear how totally heartbreaking it was."

I'm actually tearing up while I write this just thinking about it. But go ahead, Max fans, and pat yourselves on the back, because we might have single-handedly saved this character. She tells me that right after the draft of Episode 10 was handed over to her, "We get a call from MTV and apparently the footage of Max making croutons has started circling through the network. And they call us up and they go, 'Does Max have to die?' And I’m like, 'No. No, Max does not have to die.'"

Croutons and Finding Carter fans' obsession with watching Max make them literally saved the character from death. Well, and the fact that every character on the series and person in the world loves him.

Minsky starts naming all of the characters that fell in love with Max right away, from Elizabeth to Lori to Taylor, and gushes, "It’s really the crouton scene that saved him. And his acting – you know, just in general, he is perfect. He is a perfect fantasy – great, smart – and he knows this character." I mean, would anyone disagree with the assertion that Alex Saxon is the perfect fantasy? Because I wouldn't — not for a second.

And much like Minsky, who says it was "such a huge relief that we didn't have to kill him," it was a huge relief for me when Max's eyes opened last Tuesday night. If he's going to be a jerk, break up with Taylor, and move away, at least he'll be alive while he's doing it. A living Max, even if he's not around all the time, is 1000 times better than a dead Max any day.