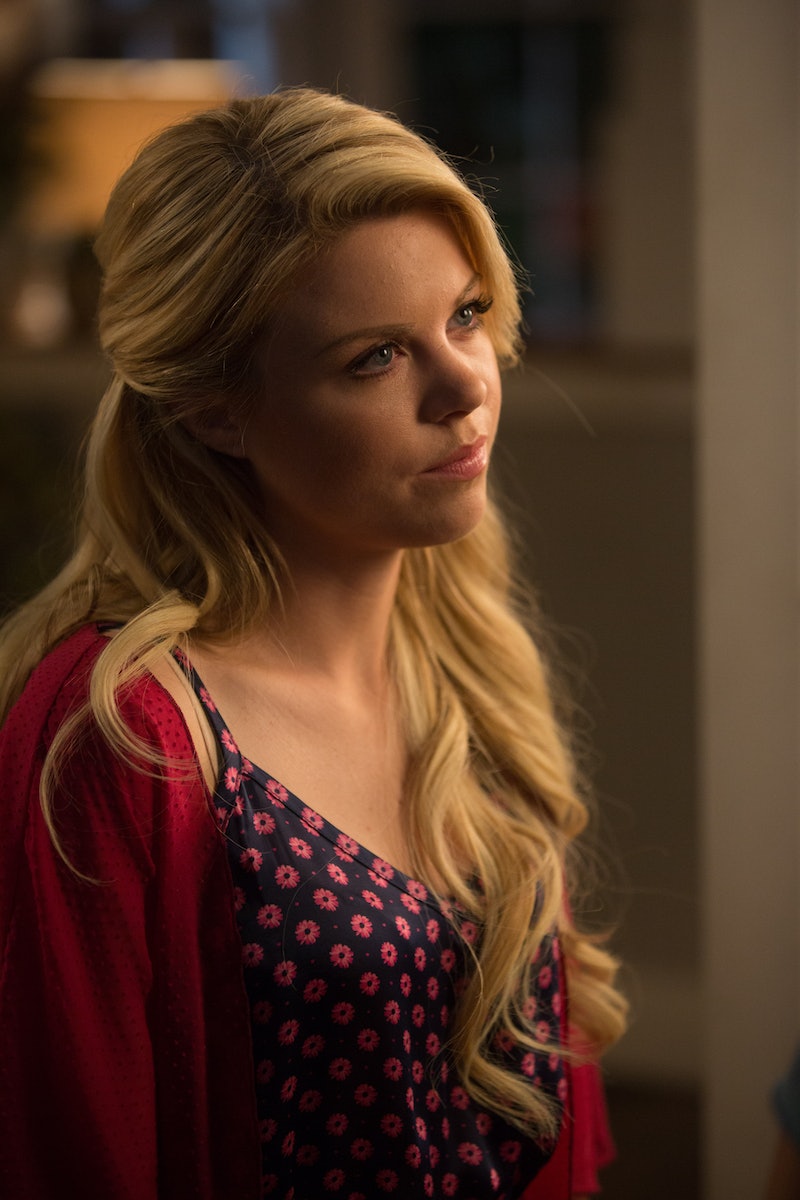 Like a lot of gay ladies, I was not impressed when I heard the premise of MTV's Faking It : two straight girls pretend to be lesbians to gain popularity at school. I thought the show was making light of the struggles LBGT youth go through and capitalizing on straight men's fetishization of lesbians, yadda yadda yadda. But then I watched the show, and it quickly grew on me — it helped that one of the two main girls turns out to actually be gay (or at least questioning her sexuality). Annnnd that she is super fine. Now Faking It is back for its second season, and it's doubling down on its representation of queer youth. In an interview with Entertainment Weekly, showrunner Carter Covington revealed that in the very first episode of Season 2, we'll find out that Lauren is intersex. At the end of the first season, it was revealed that Lauren was "popping pills," though we didn't know why. Turns out, they're hormone pills.

In the interview, Covington explained that he and the writers decided early in the first season to make Lauren (played by Bailey Buntain) intersex, saying, “I knew I didn’t want Lauren to just be the girl who comes in and says bitchy things. Since our show is called Faking It, we were talking about what Lauren could be faking or hiding, what could be inside her that makes her this tough-as-nails, hyper-feminine character, and Intersex came up.”

For those of you who aren't quite sure what the term "intersex" means, here's a brief rundown: In the simplest terms, "Intersex is when your biological sex doesn’t neatly fit into the male/female binary," according to Inter/Act Youth, an organization that spreads awareness of the intersex community. "Intersex" is a blanket term that covers over 30 different conditions. It can refer to someone who's born with ambiguous genitalia, someone who has XXY chromosomes, or multiple other conditions.

Lauren has Complete Androgen Insensitive Syndrome (CAIS). All people with CAIS have XY (or male) chromosomes, but before birth and during puberty their chromosomes are "unable to respond to male hormones," and thus their bodies develop as female. According to the Intersex Society of North America, "The newborn AIS infant has genitals of normal female appearance, undescended or partially descended testes, and usually a short vagina with no cervix. Occasionally the vagina is nearly absent." As biological sex and gender are so closely linked, intersex individuals may also identify as queer, transgender, or another of the infinite gender identities in existence. Transgender actress Laverne Cox will also appear on Faking It this season, adding even more to the show's diverse representation of gender and sexuality.

The biology behind being intersex is complex, and then there's the social stigma that goes along with not fitting neatly into the gender binary. Though there have been a few intersex characters on TV in the past (mostly on episodes of medical dramas like House), there's never before been an intersex main character, or one that will be given such a positive storyline, before Lauren on Faking It. This is a big moment for intersex and LGBTQ representation! According to Inter/Act Youth, one in about every 2,000 people is intersex (that's about the same rate as people born with red hair). It's very exciting that intersex people will finally be represented in pop culture — and not as anything other than normal folks with a medical condition. Yay, progress!

On Faking It, Lauren has hidden her condition her whole life because she's afraid of people's reactions. When she confided in her Season 1 boyfriend Tommy, he broke up with her, pulling probably the douchiest move in recent MTV memory. But by the end of the first episode of Season 2, the whole gang, including Karma, Amy, Liam, and Shane, will all learn of Lauren's intersex condition, and from everything I can see, it looks like they react as though they were actual humans capable of sympathy, and don't freak out. Good job guys, you're all not terrible.

We'll have to keep watching to see how the rest of Lauren's storyline progresses throughout the season. I'm personally hoping for a conversation between Lauren, Amy, and Shane about dealing with LGBTQ issues in high school, and maybe sharing those struggles will bring them closer together. Orrrr, maybe Lauren will be exactly the same power-hungry narcissist she's always been, but now we'll have some more insight into her character. She may be intersex, but she's still the same meanie she's always been. And that's progress.