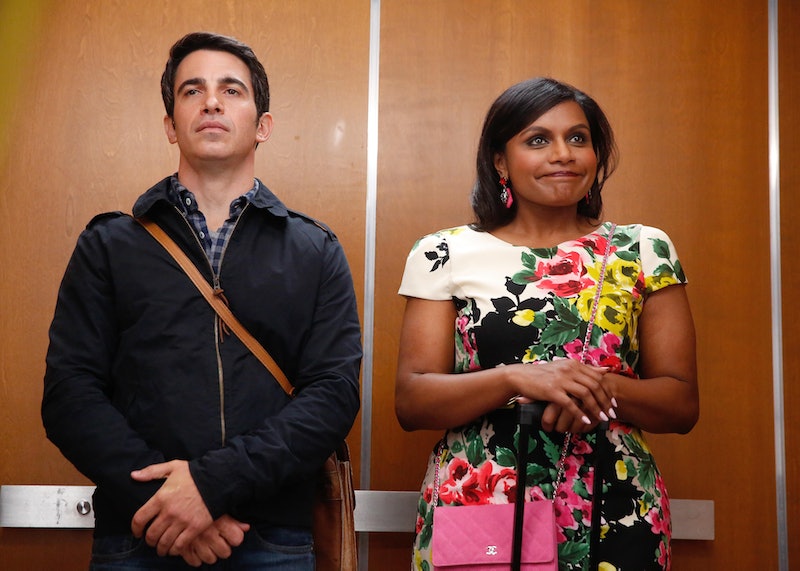 Tuesday is an amazing day because The Mindy Project Season 3 premiere will grace our televisions, and we can finally get our Mindy and Danny fix. Finally. It feels like a long time coming, after all, the show has been teasing Danny and Mindy getting together since the very beginning. The first episode of the season is titled "We're A Couple Now, Haters," which, I don't know who is hating on Danny and Mindy, but I will hunt them down, and teach them to love Mindy and Danny together, mark my words.

The Danny and Mindy relationship has been a constant will they/won't they for the first two seasons of the show. The two have always had a flirtatious rapport together, but we first saw Dr. Castellano take action on his feelings in the second season mid-season finale when Danny and Mindy shared a steamy kiss on the back of an airplane. The writers of the show have said that they were worried to make Mindy and Danny a couple too early on in the show, because once you're in, you're in. They're a couple, and there is no turning back. So while it might seem frustrating that the two are only getting together now, think of it as the writers doing us a favor.

But it's a been a long summer, so you'd be forgiven for mis-remembering their romantic timeline a bit. Other than this part, obviously:

In the 14th episode of the second season, "The Desert," all of our hopes and dreams seem to come true when Danny and Mindy shared a very passionate kiss in the back of an airplane. I didn't even care that the plane felt too spacious to be real, because it was that amazing of a moment. Everything felt right in the world, and then we were left with a winter hiatus, when suddenly things started to feel too good to be true.

When the show returned, Mindy and Danny were ready to jump all in, that was until Mindy had some problems dumping her smitten boyfriend at the time, Cliff. It was a classic rom com set up where the two who should be together, can't be together, making Danny and Mindy feel even more "meant to be" than they already did. When Danny started to have second thoughts about their relationship, saying he was worried he would lose his best friend, our hearts broke along with Mindy's. I even found myself screaming at the TV, "Then why did you kiss her?" as Mindy screamed the same thing to Danny.

Was it too good to be true? Were we just suffering from the altitude of the plane kiss to realize that these two are better off as flirtatious friends, something that couldn't be messed up. Danny quickly realized that was not the case and started to lure Mindy back to him — I mean lure in the non creepiest of ways — by having her move next door to him. It seemed like the perfect setup for the two to get back together.

The Sleepless in Seattle Part

Danny's final try for getting Mindy back was when he posed as a "missed connection" from the subway that baited Mindy into falling for a guy she didn't even know. When Danny revealed he was the real "missed connection," it seemed like any chance the two had was out the window, but Danny asked Mindy to give him one final chance. After a rom com struggle of meeting at the top of the Empire State Building — I still don't know how Mindy was supposed to climb 80-plus floors to get to the observation deck — the two find each other and share a passionate kiss while basically passed out on the dirty ground, and I'd want it no other way.