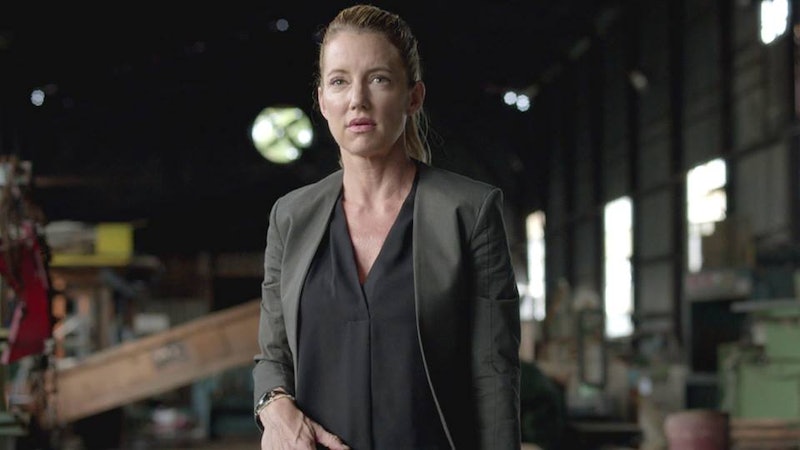 What was your first thought after watching the Finding Carter Season 1 finale? Okay, maybe that's not a fair question because your first thought absolutely was that you couldn't believe that Lori kidnapped Carter again. And then immediately after that, "Wow, how freaking crazy is Lori?" Because, after introducing her like the most fun and awesome mom ever in the pilot episode, Finding Carter brought Lori back for the finale as a completely unrecognizable version of herself. In an interview with Bustle, showrunner Terri Minsky explains how fans were supposed to react to seeing Lori and Elizabeth side-by-side, "My goal was to have, by the end of the season, people’s opinions about these two people completely flip."

And flip they did. When Lori showed up in a blonde wig to the Wilson residence posing as a therapist for Carter, she was completely unhinged and manic, and I was shocked. That was intended to surprise viewers, as Minsky tells me about how she set fans' perceptions of Elizabeth and Lori with the pilot episode. "I was hoping as a result of the pilot, people would feel very strongly that Lori was the right quote-on-quote actual real, right, correct mom and that Elizabeth was sort of this terrible, prison warden version of a mom," she says.

But really, Minsky reveals, we shouldn't have been surprised by Lori's behavior at all, because the fact was there all along that Lori "may look like this sunny, happy, loving character, but she kidnapped a child and allowed the mother of that child to believe for 13 years that her daughter was dead." It takes a specific kind of person to do that, Minsky says, a person with a certain type of personality that could do that to another woman. The showrunner references Jennifer Aniston's infamous quote about Brad Pitt when discussing Lori's emotional state and says "There's a sensitivity chip missing" from the character, which fans should have seen from the series' very first episode.

And as far as I can tell, Minsky was successful. We've grown to understand and feel for Elizabeth since the pilot, rather than fear her as force of oppression, and instead, we've started to fear Lori. Because, well, that woman is straight-up nuts.