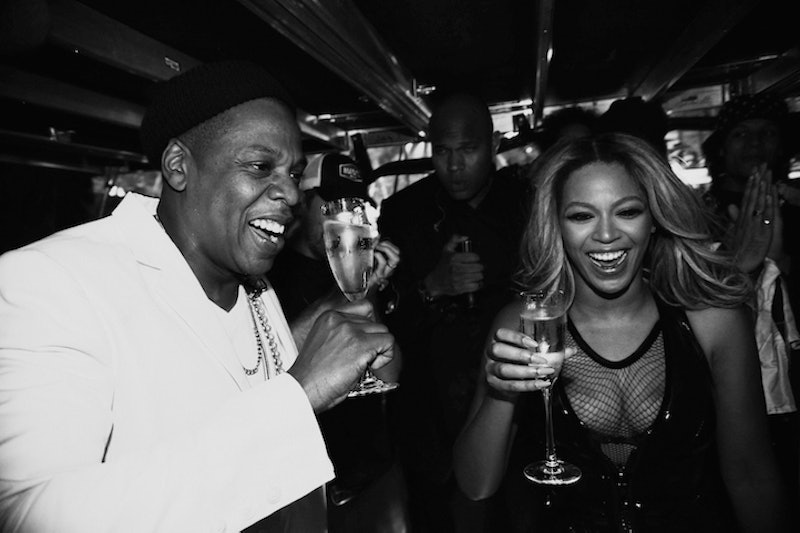 As if we needed more reason to believe that Jay Z and Beyoncé are American royalty. Now that the rumors that Jay Z and Beyoncé are getting a divorce have more or less died down, it seems like people need something new to talk about. That something is on the other end of the spectrum. Instead of breaking up, Jay Z and Beyoncé might be pregnant with a second child. The evidence on which this rumor is founded is pretty shaky — I mean, the proof is similar to the "proof" for the divorce that never happened — but it's enough to get people talking. However, Beyoncé was photographed holding champagne and that's not pregnancy behavior.

We've been in this situation before. Kate Middleton was once rumored to be pregnant in April 2014 long before the announcement of the second royal baby, but those rumors promptly died when Middleton was photographed drinking wine like a super not pregnant woman would do. Since I revealed myself as being on Team It Could Happen, it's worth it to point out one very key difference between Beyoncé's alcohol photograph and Middleton's alcohol photograph. See, when Middleton had her picture snapped, she was actually drinking the wine. In her photograph, Beyoncé is just holding it.

Don't get me wrong. I'm not saying that this isn't evidence that Beyoncé's not pregnant. After all, this is one of many pictures posted from their celebration of the end of the On the Run Tour in Paris. There's no real reason why Beyoncé would pose for a picture with champagne in her hand if she wasn't putting a nip in the bud of those baby rumors before they truly get off the ground. All I'm saying is, the fact that Beyoncé isn't actually seen drinking the champagne in the picture casts it in more doubt that Middleton's.

Champagne is the go-to alcoholic beverage for celebratory events, but, speaking as a person who doesn't drink, all you're really expected to do with it is hold the glass and tap it against someone else's. Once the toast is over, no one really cares what you do with it after that. Beyoncé's possible pregnancy wouldn't stop her from raising a toast in honor of the end of the tour and then handing the glass back to someone who doesn't have a second baby on the way.

Plus, Jay Z changing the lyrics of "Beach is Better" is hardly an official announcement of any kind of pregnancy so this could be Beyoncé casting doubt on the rumors until she's good and ready to announce it herself. Then again, maybe I'm stretching because we need another baby Blue Ivy in the world.