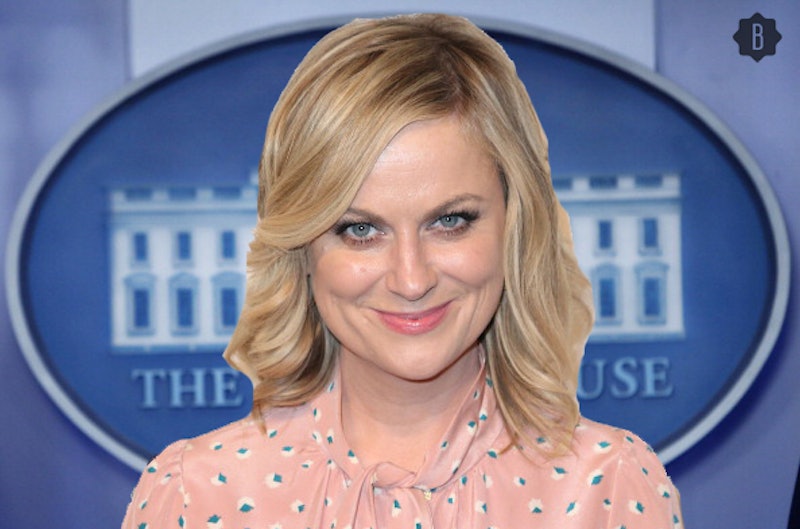 43 years ago today, the world saw the birth of a future feminist icon. The list of people I could be referring to is probably endless these days, what with more and more celebrities willing to come out and identify as feminists, but in this particular case I am talking about Amy Meredith Poehler. Poehler is known for a lot of things aside from her role as Leslie Knope on Parks and Recreation or her comedian history on Saturday Night Live. For one thing, Poehler and Tina Fey are the cutest best friends ever and make us all jealous every day with their womance. For another thing, Poehler is basically the queen of womansplaining and an inspiration to us all.

When it comes to a woman as amazing as Poehler, the only thing I really want her to have for her birthday is a really good time. But since she's lacking in social media, it's unlikely that we'll get to find out today what she spent her birthday doing besides probably having a quiet dinner with her friends and her children. However, knowing Poehler as well as I do from never having spoken to her before in my life, I was able to come up with a few theories for what Poehler probably has on her to-do list for her future.

If there's one thing that Poehler loves, it's guiding the next generation of feminists into recognizing their own unique talents and refusing to apologize for that. She's been described by many celebrity friends as a mama bear and a leader and she founded Smart Girls at the Party with Meredith Walker as a means to a feminist end. For that reason, it wouldn't surprise me to hear that Poehler put on some sort of event for young women and considered their happiness enough of a birthday party for her.

3. Being the Lead Act at a Beyoncé Concert

Not only did Poehler get introduced as Beyoncé at the 2014 Emmy Awards, but I basically consider her the Beyoncé of television because she's such a transcendent, flawless role model when it comes to all things TV. Naturally, Poehler's next secret plan is probably just becoming Beyoncé. It doesn't matter if she can sing or not. Just imagine how much cooler you are when Beyoncé is your backup dancer.

4. Starring in That Brangelina Film

Okay, so Poehler has never expressed an interest in starring in Angelina Jolie and Brad Pitt's first post-marriage film, By the Sea. However, Jolie and Pitt just look so depressed in the first look photos that were released by Entertainment Weekly on Tuesday that all I can think is that Poehler would make that movie ten times better and ten times happier just by virtue of being on set.

5. Being Anywhere With Tina Fey

Fey and Poehler aren't exactly the nightclub sort and they never really have been. Comedy club? Yes. Nightclub? Not so much. But if Fey is there then there can be no doubt that Poehler is having a good time because Fey is her best friend and combining them always guarantees shenanigans.

Oh, sorry, is that just me? Yes, yes, I know Leslie Knope is the fictional character who has expressed an interest in running for president and not Poehler, who portrays her. That doesn't change the fact that if Arnold Schwarzenegger can decide he's tired of being Terminator and get elected Governor of California, then I would totally vote ten hundred times to get Poehler in the White House. Sorry not sorry.

More like this
Sandra Bullock, Girlboss Extraordinaire
By Matt Harkins & Viviana Olen
20 Photos From The 'Stranger Things' Season 4 Premiere To Make You Feel Old
By Alyssa Lapid
Watch The Dramatic First Trailer For Netflix's Jennifer Lopez Documentary
By Alyssa Lapid
'Doctor Who’s New Star Is Already Huge On TikTok
By Maxine Harrison
Get Even More From Bustle — Sign Up For The Newsletter