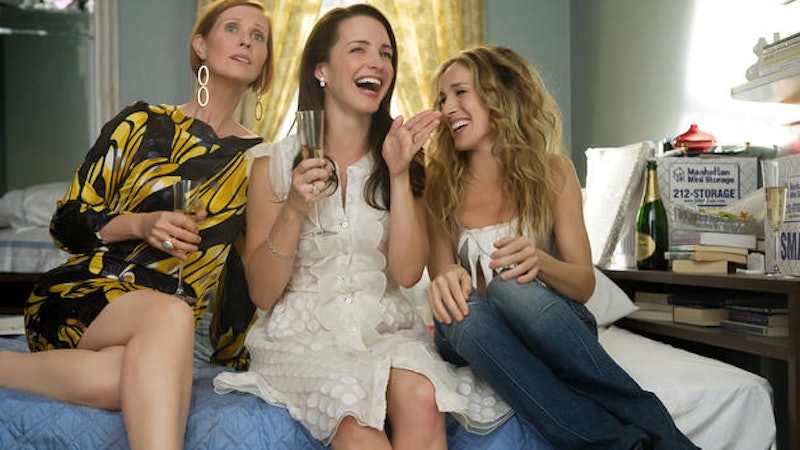 Nothing says true love like being able to tell someone everything . Not just the day-to-day mundane stuff like how you overslept again, but also the not-so-pretty stuff, like how the last time you pooped, it was shaped like the state of Florida. Because that's what best friends are for, right?

I know I can tell my closest friends things that I would have an extremely hard time telling even my doctor. But that's why I love them — they are the keepers of my secrets, my closest confidants and coconspirators.

During this International Women’s Friendship Month, it’s time to pay homage to the women in the world who will not only listen to our tales about our bowel movements, but also tell us when we’re being a total bitch, when we have a big scary green thing in our nose, and who will rip into our ex-boyfriend — to his face mind you — about how he’s a complete piece of dirt. Yeah, he had that coming. If that isn’t love, then what is?

Here are the 21 things that you definitely only tell your closest friends in the world.

I FELL ASLEEP IN THE MIDDLE OF SEX LAST NIGHT. AGAIN.

Well, the lesson might do her some good. I love her, but she can be a real brat.

I JUST ATE CAKE OUT OF THE TRASH

The cake was only there because you had consumed half of it for breakfast and you were trying to save yourself from the other half of the deadly, heavenly goodness. No judgment from your best friend, obviously. Only laughter.

YOU’RE NOT PAYING ENOUGH ATTENTION TO ME AND IT SUCKS

You can't usually get away with being this needy. But you'll tell your best friend when you're feeling rejected, and vice versa.

DID YOU BRUSH YOUR TEETH THIS MORNING? BECAUSE YIKES.

Dude, have a stick (or five) of gum, please!

From hair, to body odor, to your breath, only your besties get such an honor.

I HAVEN’T DONE MY LAUNDRY, SO I’M WEARING DIRTY UNDERWEAR INSIDE OUT

WE HAVE A FUNKY SPUNK SITUATION ON OUR HANDS AND YES, IT TASTES LIKE BLEACH AND ROTTEN ASPARAGUS

Ah, the things we learn in Sex and the City and realize are so true in the real life, too.

But she lets you do it for free, of course.

You say it because you know it'll mean something coming from you.

YOUR BRA IS DOING THE TOTAL DOUBLE-BOOB THING. HERE, TAKE MINE INSTEAD

I HAD A really weird SEX DREAM LAST NIGHT

If only you could have sex dreams about Han Solo instead, like everyone else.

Nothing like being honest about how you don't really feel like hanging out with your old mutual friend anymore.

YOUR BOYFRIEND IS LITERALLY THE WORST

Someday she’ll realize it, too. In the meantime, it's your duty to remind her.

I’VE BEEN TO CHIPOTLE TWICE A DAY THIS WHOLE MONTH

And not for “for all intensive purposes.”

YOU’RE totally THE CARRIE TO MY MIRANDA

More like this
This Company Will Send STI Tests Right To Your Door
By Lexi Inks
14 Underrated Date Ideas To Try With Your Partner
By Lexi Inks
Bumble's "Compliments" Feature Lets You Message Before You Match
By Lexi Inks
Dyson Is Dropping Futuristic, Air-Purifying Headphones
By Rachel Lapidos
Get Even More From Bustle — Sign Up For The Newsletter