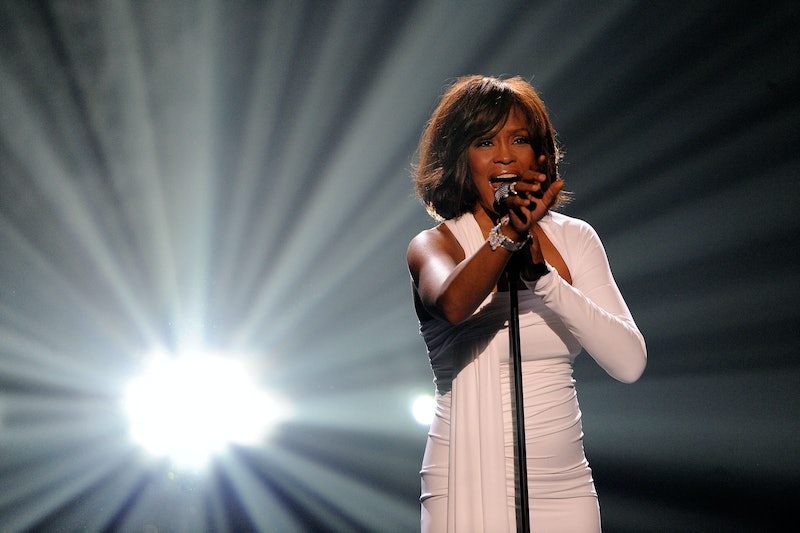 The idea of a Whitney Houston Lifetime biopic hasn't gone over so well with the family of the late songstress or fans who believe her life story deserves the full Hollywood treatment. Fortunately, Clive Davis made an announcement Tuesday on Today that should appease anyone who'd rather pass on an unauthorized retelling of Houston's life and instead, continue to honor her memory through her music. Billboard reports Legacy Records will release a CD/DVD titled Whitney Houston Live: Her Greatest Performances on Nov. 10, the first of its kind.Featuring the most rousing live Houston performances from the '80s and '90s, this album seems like a very fitting way to keep Houston's musical legacy alive and thriving. For one, it's far less controversial than the Angela Bassett-directed biopic and instead of drudging up all of her personal issues, it keeps the focus strictly on what fans love and miss most about Houston—her voice. To that point, Houston's family is completely on board with this project.The track listing hasn't yet been revealed, so I can only hope that most of my favorite Houston songs make the cut. Honestly, if I had it my way this CD/DVD would contain enough music to fill up two discs, but since I'm forced to narrow it down, here are eight Whitney Houston songs that should definitely be included on the live performance album:

"I Will Always Love You"

"I Will Always Love You" is not only a timeless classic, but also such an appropriate way to describe how fans feel about Houston and her musical legacy.

A compilation of live Whitney Houston songs wouldn't be complete without a live rendition of her famously inspiring national anthem performance at the 1991 Super Bowl.

Quite frankly, this CD/DVD will be nothing if it doesn't include this song. OK, not totally, but still, it's a must-have.

"I Wanna Dance With Somebody"

This is one of my absolute favorite Whitney Houston songs because it exhibited a more carefree, fun side that differed from her more serious ballads.

"Saving All My Love For You"

You can't listen to this song and not be reminded of Whitney Houston's second film role in Waiting to Exhale.

"How Will I Know"

If Davis features this song on the album, it's the only way I'll know if he really loves me.

"All The Man That I Need"

Houston's live performance of her chart-topping 1991 song is absolutely flawless.