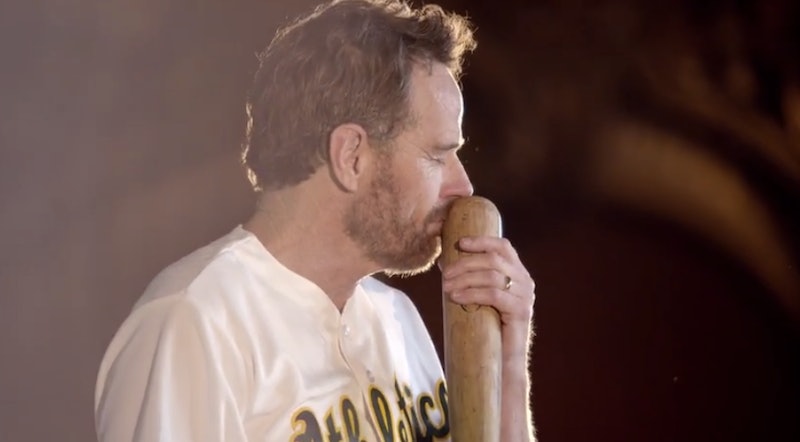 Bryan Cranston is an American treasure, so it's only natural for him to be a spokesperson for America's Past-time — baseball. The Breaking Bad star just made a tongue-in-cheek video for TBS to promote Major League Baseball's Post-Season. As fans gear up for the play-offs, Cranston gears up in MLB uniforms and leotards for his faux one-man show about the road to the World Series.

Stepping into his "serious actor" mode, Cranston is pitch perfect in his delivery. It seems like all of those years playing television's number one bad guy have actually made him funnier than ever. In the clip, Cranston takes us behind the scenes of his passion project. He's got help from MLB All-Stars and a prima ballerina to prepare him for the role of a lifetime.

Watch the Emmy and Golden Globe-winning actor pie himself in the face, recite "Take Me Out to the Ball Game" as if it were "To be or not to be," and be amazed by his surprisingly agile turn-out. If you ask me, Cranston has never looked better. Sure, he wowed Broadway audiences with his performance as Lyndon B. Johnson in All the Way, but this new stage masterpiece really seems to be his calling.

Let's take a look at Cranston's most dazzling looks in the MLB Post-Season:

This makes me want to take an intensive at Tisch and never look back.

It's a metaphor in the game of LIFE.

Do you hear the people cheer?

The Groove in White

I want to be a part of whatever is happening here.

How does one man capture an entire stadium? HOW!?