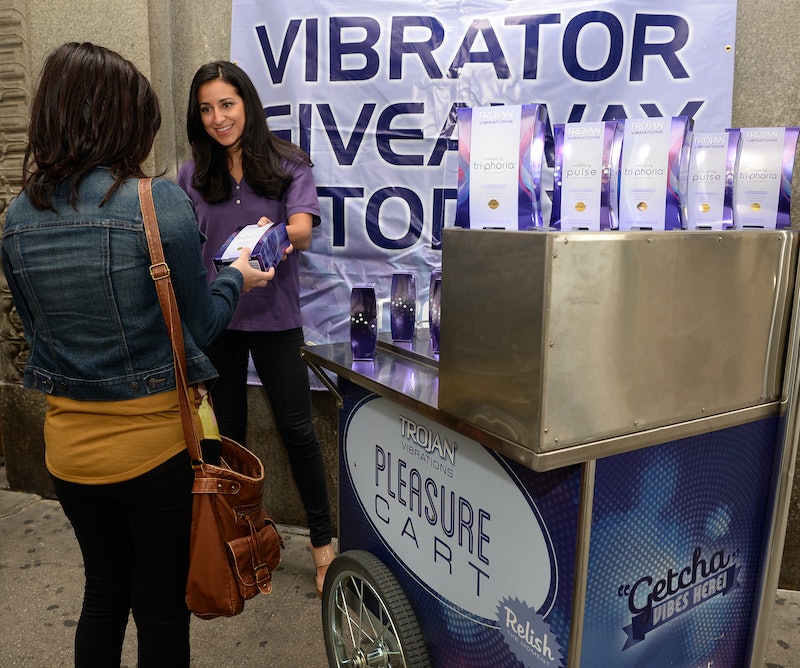 While the device is pretty user-friendly, you'll definitely want to explore before incorporating it into intercourse. You may, for hypothetical example, be confused for days about which part goes in you and which part goes on your clitoris, simply because you were too lazy to read instructions. You'll want to figure this out first, for maximum pleasure. Some other things you’ll want to figure out: which vibrations you like. Slow? Fast? Undulating? Staccato? Which setting do you like on your clit, and which do you prefer on your G-spot? (Yeah, you can set different modes for each part.) These are just a few of the questions you must contend with. You control the mode (“pulse,” “wave,” “echo,” etc), the duration of that mode, and its intensity.

I spent one afternoon playing around with all the settings, and I concluded that the wave setting, which undulates in intensity, was my favorite, on both the external G-spot stimulator and the clitoris stimulator. (Wave on clit and "cha-cha-cha" on G-spot was fun, too.) You'll have to fool around to see which you like best.

The device’s versatility is overwhelming. You can put it in your butt, around the shaft of a penis, even “under your chin during oral sex,” according the Tips and Tricks section of the app. I don’t even know what that means.

Overwhelmed by possibilities, I decided to start small and simple: one part inside, one part on the clitoris. Danngggg was all I really had say about that. Danngggg. It wasn’t immediately clear to me that I needed to involve my partner. Note: Experimenting by myself was fun, but way more fun with lube. While this latest We-Vibe model does not come with lube, you’ll definitely want to have some on hand.

The extra clitoral stimulation felt great, but honestly, it took some getting used to. At first, I felt like there was too much going on, which made it hard for me to completely relax and feel present. If you decide to use the We-Vibe 4 with a partner, you must first accept (and embrace) that there will be a lot of futzing, adjusting, and a substantial amount of laughter. And that’s kind of the point: adding a little bit of fun and awkward and weird to sex. For example: nine times out of 10 you'll accidentally knock the remote control off the bed. It's not so easy keeping track of different technologies (vibrator, remote, iPhone) when you're in the midst of sexual intercourse.

At the very least — and this is true with both personal and couples vibrators — you’ll develop a stronger sense of what you like and what you definitely don’t, and that information is invaluable.

The thing about couples vibrators (and the thing about couples) is that each individual will have a wildly different experience, and the success of the device (or the relationship) is your ability to make it work for you. Personally, I wasn't crazy about having a penis and the G-spot stimulator inside of me at the same time. I was surprised to discover that, just like there are a thousand ways to skin a cat, there are even more ways to enjoy a couples vibrator. So, when it felt like too much, I thought: Why not swap the penis with a finger, or a tongue? The only limiting factors here are your imagination and initial terror.

More like this
18 Hinge Prompt Answers To Try If You’re Looking For Something Casual
By Lexi Inks
12 Aphrodisiac Desserts To Spice Up Your Valentine’s Day
By Kaitlyn Wylde
31 Ways To Celebrate Valentine's Day With Your Long-Distance Love
By Natalia Lusinski and Carolyn Steber
21 Galentine’s Day Memes To Celebrate Your Best Friends
By Meghan Bassett and Mia Mercado
Get Even More From Bustle — Sign Up For The Newsletter
From hair trends to relationship advice, our daily newsletter has everything you need to sound like a person who’s on TikTok, even if you aren’t.