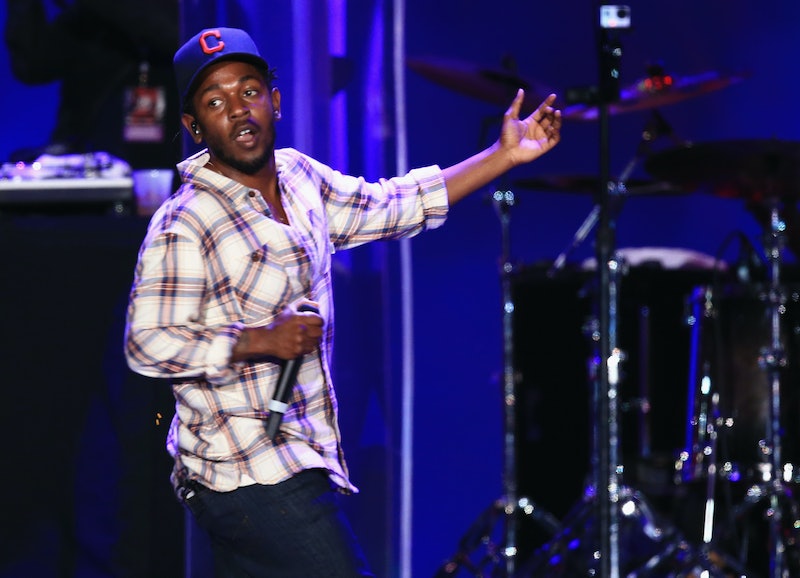 If you asked me how I feel about K. Dot, I guess I'd have to say... I'm not NOT in love with him. So I'm freakin at the news that after a long, two-year wait, Kendrick Lamar announced through Twitter that a new single from his next full-length album will be released next week. The song's title has been confirmed as "i" though previously was thought to be "(i) (love myself)" (we love you too). It's a heavily anticipated followup to 2012's good kid, m.A.A.d city, which went platinum because it's AMAZING.

So where's he beeeen all this time? Why's it taken so long for Lamar to give us more perfect hip-hop? He's been busy as all get-out, that's what. Between 2012 and 2014, Lamar has done toooons of guest verses (here are some of his best and baddest), which is why it's slightly surprising (but not in a bad way) that he revealed that his new album will be totally free of guests. "I have so much to say... it's almost selfish of me," he said of the forthcoming release. Nonsense!

He's also performed on SNL twice in the last two years, toured with Yeezus, NBD, and gave life to the 56th Annual Grammy Awards with his pyrotechnic, electric performance with Imagine Dragons (incidentally, he also taught us there's a band called Imagine Dragons). And even though he shamefully did not win ONE of the Grammys he was nominated for, he took it in stride, even after Macklemore's post-Grammy apology text. So we can't blame Kendrick for not releasing his album sooner; and I'm sure the wait will be well worth it.