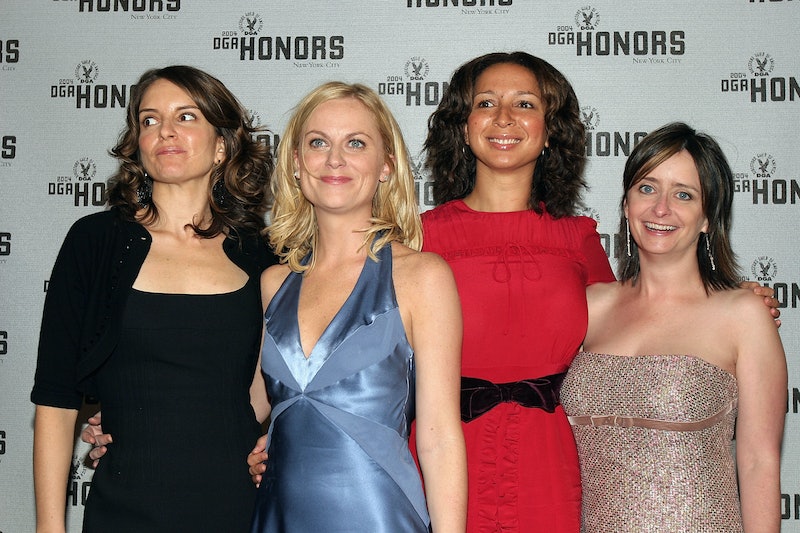 It was preordained that I'd be super into The Nest before seeing even one scrap of actual footage. Tina Fey, Amy Peohler, Maya Rudolph, and Rachel Dratch? Hallelujah, amirite? Forgive me, but: I want to go to there. My FOMO for this entire project also tends to increase tenfold when Fey and Seth Meyers reminisce about all the good times they had on The Nest's set.

Meyers — who isn't actually in the movie but who just happens to be friends with its entire cast thanks to Saturday Night Live — recently talked with Fey on his show about the time he and The Mindy Project's Ike Barinholtz (who is in the movie) drove out to the Long Island town where the movie was filming and hung out with them all. If I wasn't already excited about The Nest — and trust, I was — just hearing about the behind-the-scenes shenanigans is getting me even more psyched.

Apparently the collective forces of Fey, Poehler, Rudolph, and Dratch really conquered that unsuspecting Long Island town. As Meyers put it, "I feel like by the time we got out there you I felt like you were almost like a mafia family that ran that town."

Fey isn't even on the press tour for The Nest yet, by the way: That movie doesn't come out until 2016, and on the same day as Star Wars. The actual movie Fey's promoting is This Is Where I Leave You , which has an amazing cast but not as great a cast because Poehler's not there, you know what I'm saying? And considering the popularity of the Nest anecdotes already, we can probably expect a whole lot more stories about Paula Pell hiking up her skirt or the SNL ladies' collective brood of children in the months to come.