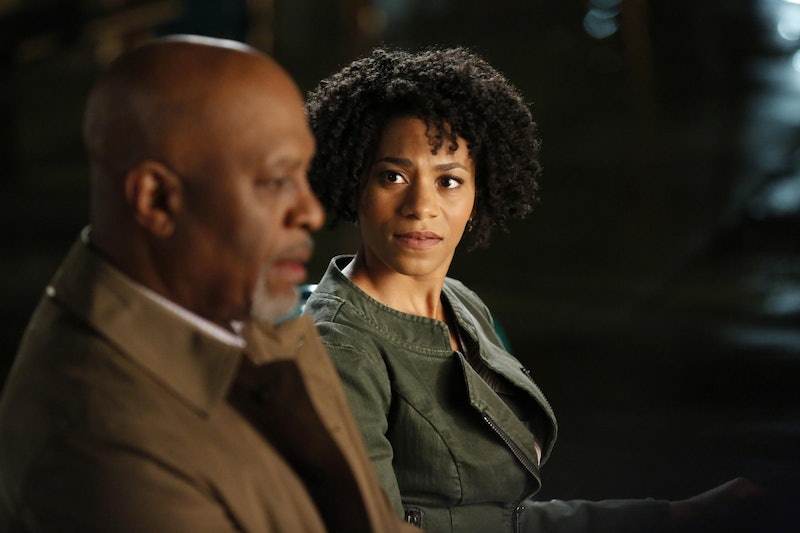 It's easy to forget all of the bombshells that the Season 10 finale of Grey's Anatomy dropped on us, because pretty much everything in the episode was overshadowed by the departure of Meredith's "person," Cristina Yang. But now that the ABC medical soap is a week away from premiering (next Thursday night, in fact), it's time to move on from that heartbreaking loss and focus on the future. A future that includes Grey's giving Meredith another half-sister.

Other cliffhangers from the finale include: Meredith and Derek's marriage is in trouble since she decided to stay in Seattle while he moves to D.C.; April and Jackson are going to have a child; Bailey was promised Cristina's seat on the board, but Cristina intended to leave her spot to Alex. While these are all juicy and we can't wait to see how they resolve, the twist that I'm most anxious about is the revelation that Meredith has a half-sister she doesn't know about. Yes, another one.

New head of cardio Dr. Maggie Pierce (played by new addition Kelly McCreary, formerly of Scandal and Emily Owens, M.D.) is the third half-sister Meredith will have found out about during the run of the show, after Thatcher's daughters Lexie and Molly. But this time, her surprise relation doesn't come from her dad's side. Maggie is Ellis's daughter, who Meredith's mom gave up for adoption after accidentally conceiving with none other than Dr. Richard Webber.

Although this latest curveball may seem like a typical soap opera complication created off-the-cuff for added drama, creator Shonda Rhimes insists in an interview with TVGuide that Ellis having a secret child has been in the cards since early in the game:

What's interesting for us is that Maggie has been a piece of story that we have had and known about since Season 4 — well, honestly since the beginning. That was one of the original pieces of story since the beginning with the Richard-Ellis dynamic, but it's been a piece of story since Season 4 when we talked about introducing her ... It's not a thing where we're going in and backdating. It's literally always been layered into the story line. We can literally go back and pull out moments of the show and I'm excited to do so, and point out where it was talked about. It's not going to be so hard to do.

Regardless of whether or not Rhimes is telling the truth or doing some hardcore retconning (basically reframing past stories to suit the plot at hand), I can't wait to see how Meredith reacts when she finds out her mother hid an entire pregnancy from her. And because I'm impatient for Season 11, here's how we can all imagine the drama going down:

Meredith finds out from Maggie and freaks out.

Dr. Pierce is clearly unaware of the emotional chaos her news will wreak, given the flippant way she informed Webber about her past. Obviously, she doesn't know that Webber is her father, so she had no reason to tread lightly... but the same goes for Meredith. Maggie has no idea that she has a sister at Grey Sloan Memorial Hospital, so the cardiothoracic surgeon is just as likely to spill the truth to Meredith, not knowing their relation.

What with just losing her "person" and her marriage being on the rocks, Dr. Grey seems in a keenly unstable place to be receiving such devastating news. Finding out that her overbearing mother kept such a big secret from Meredith her entire life might send her on a season-long tailspin-slash-quest to find out everything she possibly can about her mother. (This theory jives with the fact that we know actress Kate Burton is returning to Grey's this season to portray Ellis in flashbacks.)

Webber tells Meredith and she's cool about it.

The Chief knows that Meredith is vulnerable when it comes to Ellis, and he has grown to feel like a surrogate father to her over the years, so he might take it into his own hands to protect her from the above scenario by telling her the truth himself. He would certainly deliver the news more delicately than Maggie probably would, and maybe in a way that would keep Meredith from going over the edge.

After all, this child is a secret that Ellis kept from both Meredith and Richard, so the two might find solace from her betrayal in each other. This would certainly be the best option for Meredith's mental health... which means that it's almost certainly the least likely to actually happen.

Meredith hears about it through the grapevine and pretends not to know.

Of course, we all know how functional the hospital gossip train is. There's a very high chance that Meredith might find out the truth from somebody other than either Maggie or Richard. Perhaps Webber tells Bailey, Bailey tells Callie, Callie tells Arizona, Arizona tells Alex, and Alex tells Meredith... or some variation thereof.

If Meredith managed to find out before Maggie knew she knew, then Dr. Grey would have the advantage of observing her half-sibling from a distance before actually approaching her in a sisterly way. Dark and twisty is right where Meredith lives, so she's pretty good at suppressing her emotions at this point. This scenario would likely involve copious amounts of tequila. (And maybe some phone calls to her "person" in Switzerland?)