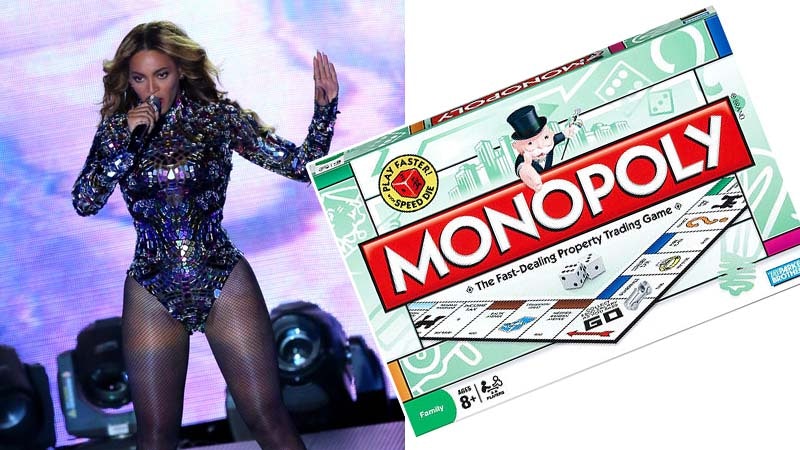 Celebrities are kind of hard to relate to. They're more talented than us, they're richer than us, and they don't even look like real people thanks to the wonders of photoshop and only getting photographed on their left sides. Sometimes, it's hard for me to remember that celebrities are just like me when Beyoncé can afford to fly to Italy for her birthday while the last time I saw Italy was in a guidebook I bought for $20 at Barnes and Noble. Or when One Direction broke a Guinness World Record and every single one of them is younger than me. I mean, really. Celebrities being relatable? I can't even wrap my mind around their lives, let alone try and relate to it.

However, I've found the perfect way to make celebrities less of a concept and more like everyday folk. All right, so thinking of celebrities in terms of board games isn't the perfect way to relate to them, but, to be honest, it helped. As it turns out, a lot of the biggest female pop stars out there can basically be summarized in a board game. The next time you're whipping out Jenga or Candy Land, take the time to think of Selena Gomez or Katy Perry. Either you'll understand them better or it will make you laugh, but either way the game is suddenly more fun.

Trainor is, at present, best known for her song "All About That Bass". However, in praising full figured women, Trainor kind of launched a missile at slimmer figures — or "skinny bitches", as the song refers to them as — which is getting her as much criticism as she's getting praise. All about that battleship indeed.

Grande is the Chutes and Ladders of board games. Her meteoric rise to the top keeps being plagued by some pretty rapid lows, like all those rumors of her being a diva and the photo shoot failure in Australia and her unfortunately tumultuous love life. Don't get me wrong. Grande has some pretty high highs ahead of her, but the road isn't going to be easy with all these rumors flying.

Swift would be the Scrabble of board games. Not only did Swift receive a Scrabble board for Christmas in 2012, but it's one of the things she and Harry Styles bonded over back when they were a couple. Plus, Scrabble is the game that your vocabulary-loving grandmother likes to whip out when you're at her house, and we all know Swift is secretly 50 years old.

Do I really need to explain why Minaj is Twister or did the gravity-defying stunts she pulled with her butt in the "Anaconda" video have you silently thinking it too?

Ever since the 2013 MTV Video Music Awards, Cyrus has been building an entire career out of being as taboo as humanly possible. I mean, Cyrus just got fined in Mexico for wiping her butt with the Mexican flag. Need I say more?

Queen Bey is Monopoly because she makes bank. She is bank. Do not bother to pass Go or collect your $200, because Beyoncé owns all property up to and including your soul.

Perry would be Candy Land because half the time she dresses like a character from the Candy Land board game. In fact, the colorful Candy Land world seems to make up a huge part of her aesthetic. Just look at the "Birthday" music and lyric video if you don't believe me.

Right now, Gomez would be Jenga because every time we think she's getting her life together she pulls the block out of our tower and sends it toppling down. By which I mean, Gomez gets back together with Justin Bieber and leaves us all in random piles across the table, sobbing in disappointment.

Duff hadn't released any new music in seven years before she finally decided to poke her head back into the music industry and come out with a new album. She's literally doing the music equivalent of Guess Who? right now. Combined with a side of the "Surprise. I bet you thought you'd seen the last of me" meme.

Let's just face facts. Lorde's life is more awesome than ours. Why would she be the board game Life? Because she's winning at it. She's only 17 years old and she's already a superstar. She's best friends with Scrabble queen Taylor Swift. She might never be royal, but she could win the game of Life in her sleep.

Risk is a game of strategy and world domination and we're currently in the midst of an Azalea takeover right now, in case you haven't noticed. There's even talk that Azalea might become the world's first female superstar rapper if she plays her cards right. This is Azalea's world and we're just living in it. (Just kidding. It's still Beyoncé's world.)

Adele's current musical career is one big mystery. When is she releasing that album? What songs will be on it? Was it Colonel Mustard in the library with the candlestick? Someone open the envelope and answer this question because I can't guess anymore!

More like this
Taylor Swift, Kerry Washington & More Speak Out On Uvalde Mass Shooting
By Jake Viswanath
Twitter Has Very Mixed Feelings About The New 'American Idol' Winner
By Jake Viswanath
Selena Gomez Joked About Her Relationship Status In Her ‘SNL’ Monologue
By Grace Wehniainen
Harry Styles Performed A Snippet Of Taylor Swift’s “22” & The Crowd Went Wild
By Jake Viswanath
Get Even More From Bustle — Sign Up For The Newsletter