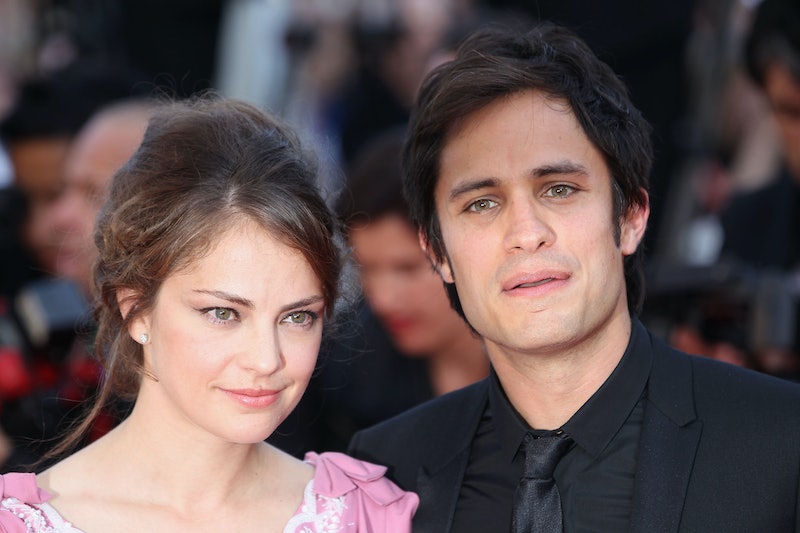 Gael Garcia Bernal, the Mexican actor with a very arresting jaw, offers some interesting information about his split from longtime beau Dolores Fonzi in the latest issue of Elle. Though the couple did indeed part ways earlier in September, they did not divorce, as was reported, because Garcia Bernal and Fonzi were never married in the first place. He elaborated on the relationship and his views on marriage and monogamy in the magazine saying,

What's important is the arrangement. The responsibility. The deal. To do it with the person you're embarking on [it with]. That's more important than anything any religion or government would say. But that's a case-by-case situation. I'm not saying it should be like this. But for us it was.

Though not such a radical view, it does seem to be in Hollywood, where celebrity weddings are parsed and parceled so sensationally that they become mass events rather than vows. And I'm guilty, too, in indulging in the fun of refreshing my browser to see new photos of Lauren Conrad's wedding dress or where George Clooney is going to tie the knot. But Garcia Bernal is grounded in his view of relationships, placing importance on the pure, bare connection and journey between two people.

Garcia Bernal, who has two children with his former partner Fonzi, went on to say about monogamy: "So all the moral issues that carry with monogamy and the real meaning of where it comes from? It's questionable nowadays. I can't say I don't believe in it. I just think that everyone has their own interpretation." This kind of poetic, modern view on marriage and monogamy doesn't come as a surprise from Bernal, considering his body of work, which includes films like Y Tu Mama Támbien and the forthcoming Rosewater , directed by Jon Stewart.

The actor never once denounces marriage, though, making a point to say that each arrangement is individual to each two people in different relationships. It's a democratic view, somewhat of a quiet outlier among the frenzied fodder of celebrity wedding details. But like he says, that's not to say that those celebrities who do have blow-out ceremonies are devaluing love or marriage, they just choose to express it in a different, more public way. His dubiousness about monogamy is probably the most radical notion, not in general but certainly in the culture of Hollywood where cheating scandals are blasted to every corner of the media. I appreciate Garcia Bernal's candor and honesty (and beard).