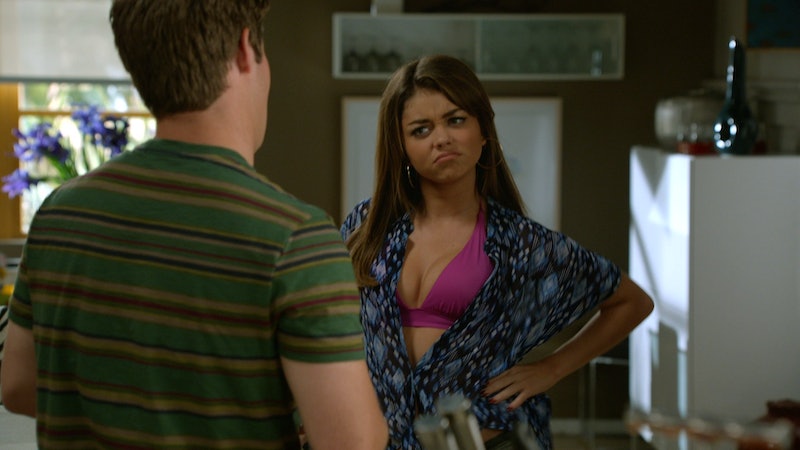 For a show supposedly grounded in reality, there are a lot of unbelievable things about Modern Family. Phil's total, how-do-you-function-in-a-job ineptitude. How he and Claire can afford that house. The fact that no one in that family seems to realize that Lily is the worst. And, in perhaps the most frustrating example of all, Haley's continued appearances on the series, despite her being college-age, getting a job, and not having any real excuse for still living in the Dunphy home.

But, of course, this is TV, and while Haley's still-frequent appearances on the series might seem odd to viewers, it makes total sense for the show. Sarah Hyland is a main cast member, Haley is a fan-favorite character, and to take her off the series for "realism" reasons would put a major damper on the ensemble comedy. So, instead, Family continues to make excuse after excuse for Haley's visibility in her post-teen years. First, she didn't get into college. Then she did, but she got kicked out. So she went to community college, which required her to live at home. Now, she's working and making money, but for awhile she kept it a secret, so no one could really encourage her to leave. The list goes on and on.

Modern Family, though, is not the only TV show to have made increasingly-ridiculous excuses for its former child actors still appearing each episode. Below, five others who did the same:

The situation: After graduating Sunnydale High, the Scooby Gang have the chance to leave town for good, attending East Coast schools or finding jobs far, far away.

How it was handled: They all stay, even though they have every reason not to. Buffy and Willow attend UC Sunnydale (despite Willow getting accepted to better schools elsewhere), Xander gets a local job, and an unemployed Giles mopes around his house.

Was it realistic? Not quite. Yeah, they're all friends, but I can't imagine Willow's parents were too pleased with her turning down Harvard for the local town college.

The situation: In her senior year of high school, Rory had to choose between attending Harvard, Yale, and several other great schools that accepted her.

How it was handled: She goes to Yale, of course, a convenient thirty-minute car ride from Stars Hallow. While there, she comes home to hang out with Lorelai practically every other weekend, yet somehow still manages to make friends, date boys, and run the school newspaper. Impressive.

Was it realistic? Actually, yes. Although Rory's booming Yale social life is suspect, it's no surprise she would still want to hang around Stars Hollow as often as possible even once she left for school.

The situation: The teenage characters prepare to begin their post-high school lives, with college, internships, and staying around North Carolina all possibilities.

How it was handled: Time jump! Season 5 begins four years later, with the gang having finished up school and now pursuing careers across the country.

Was it realistic? Hard to say, thanks to the flash-forward. But, I mean, it's One Tree Hill. Realism's never exactly been its forte.

The situation: Travis is finally ready to go to college.

How it was handled: He does, but it's a local arts-focused school that apparently has no problem with him not being there five days a week. Perhaps it's connected to those "jobs" Jules, Andy, and the rest have that allow them to stay at home and drink wine all day.

Was it realistic? For a kid as smothered as Travis, maybe, but for everyone else, not a chance. Who wouldn't want to get far, far away from the Cul-De-Sac crew and their creepy, alcoholic "bonding?"

The situation: Ryan, Marissa, Seth and Summer all contemplate their futures as the end of high school approaches.

How it was handled: Marissa dies. Ryan puts off Berkeley to grieve and beat up people. Summer goes to Brown, and the show follows. Seth lies about getting in, and apparently did not understand the idea of a safety school, so he stays close to home.

Was it realistic? The I-only-applied-to-one-school thing is irritatingly not accurate for most real-life students, but otherwise, The O.C. actually did a pretty good job of dealing with the unfortunate aging of their college-bound stars.