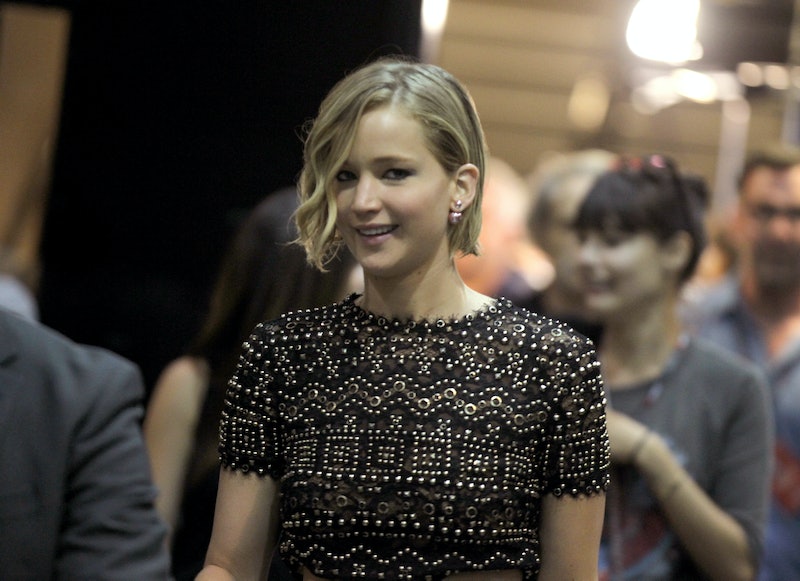 It may have been a pairing that no one ever expected, but it seems like the most unlikely couple might actually be one of the most successful: According to new reports, even with the mystery surrounding their romance, and, unfortunately, paparazzi attempting to photograph their every movement (and their rumored dates), Chris Martin and Jennifer Lawrence may be getting more serious — and Us Weekly is reporting that they're "in love" now.

Although the supposed couple reportedly only began dating in August, and keep going on secret dates together, their fear of being in the public eye obviously hasn’t stopped them from becoming pretty serious about one another.

A source recently revealed to Us Weekly that the two are quite smitten and that, while Lawrence has "had a crush on Martin since she was a teenager," Martin has "fallen in love" and "it’s the real deal."

Though as a sappy romantic I’m one to believe that love can happen at any stage of a relationship — even as early as what seems like a month for the new couple — the completely amateur love counselor that I also am hopes that they take it slow. Considering Lawrence and ex-boyfriend Nicholas Hoult broke up not too long before this new relationship started, it seems that not rushing into things would be the best idea.

Plus, it was only in June this summer that Lawrence revealed in an issue of Marie Claire that with Hoult's and her jobs, and being from different countries, being long-distance was a major thing that they had to deal with in their relationships — and it sounds like Martin and Lawrence's relationship would run into the same issues.

Obviously couples do this all time, and long distance relationships work out very often as well, before declaring their love to the world I’m hoping the two are on the same page about where their relationship is going. Love is possible no matter the distance or even the annoying paparazzi, but they should definitely establish that they want the same things from their blossoming relationship.

Above all, it's great to see that Lawrence is clearly happy — after recent events, of course, she deserves all the happiness she can get.