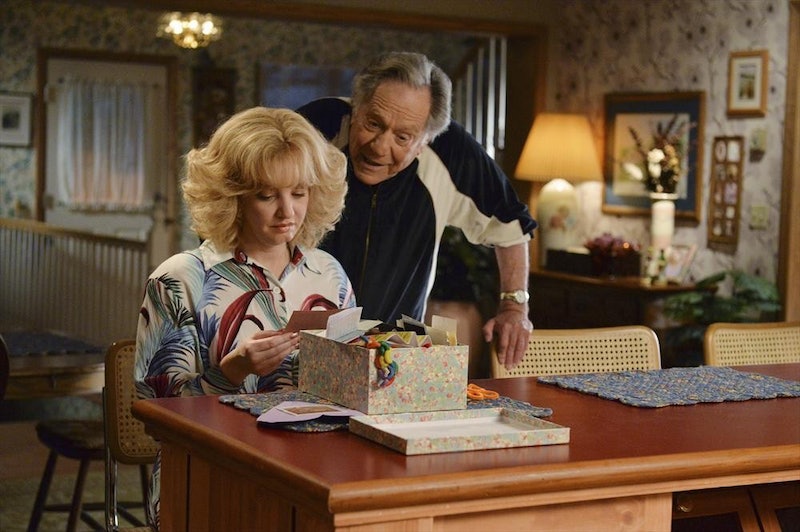 If only I could get my hands on some of Beverly Goldberg's fabulous '80s sweaters, my life would be 100 percent better. The Goldbergs returns for Season 2 on Wednesday night, but something's a little murky still: What year do the yelling Goldbergs actually live in? As creator Adam F. Goldberg (whose family was the direct inspiration for the show) told Vulture, it was a creative choice to have The Goldbergs not take place in a specific '80s year.

... I'm doing a comedy, and I'm doing it from a narrator who's just like me: When I think, When did I win Legend of Zelda? I don't remember what year it was. I only remember that it was somewhere in the mid- to late eighties. So the writers started going, "Okay, we have an undependable narrator."

Usually, I'm a stickler when it comes to inconsistencies and goofs in TV shows, but the fact that this was the plan the entire time for the show, I kind of dig it. Think of how many times you had a memory from your childhood and you were sure it included a certain movie or a certain person, only to be proven that your brain had betrayed you and what you remembered happened two years earlier with different details? Our minds combine memories — and each episode of The Goldbergs is like a giant '80s memory mash-up. For example, Adam's older brother Barry dons a red track suit, a Karate Kid headband, and a gold chain — all while rocking out to "Livin' on a Prayer" by Bon Jovi — in the Season 1 finale.

As Patton Oswald (who narrates current day Adam) said, "When it comes to my childhood, I cannot always remember exactly when something happened or exactly who was there, but I do know that it was 1980-something and it was awesome." As references from the decade abound, there are quite a few inaccuracies. So let's rewind the tape and check them out.

Going to the Movies

Adam deceives both his grandfather Pops and his mom Beverly when he tells them he will be seeing The Great Mouse Detective, but organizes it so Pops unknowingly takes him to see Poltergeist. That doesn't sound too bad — until you realize the creepy, Craig T. Nelson-starring Poltergeist was released in 1982 and Disney's The Great Mouse Detective came out in 1986. With a bunch of great kid movies released in 1982, such as Annie, The Secret of NIMH (!), The Dark Crystal (!!), and The Last Unicorn (!!!), this anachronism is particularly hard to swallow.

Yet, if they hadn't been "seeing" The Great Mouse Detective, the amazing George Segal (as Pops) couldn't have said, "Where the fuck was the mouse?" Although I guess that line would have been equally (or more) awesome if it had been, "Where the fuck was the unicorn?" But to be fair, they were probably going for the most innocent movie to be juxtaposed against Poltergeist, and those 1982 "kids movies" I listed all had some pretty spooky-ass shit in them. (With the exception of Annie — although Tim Curry's Rooster always made me a bit uncomfortable.)

Another affronting nonsensicalness movie plot point is the fact that in another episode, Adam does the Lloyd Dobler boombox move from Say Anything..., which didn't come out until 1989.

Somehow we just have to accept that Adam saw Poltergeist in movie theaters and can know about Say Anything... (which came out seven years later) without aging.

For the Halloween episode, there's a huge mix of classic '80s references all rolled into one (as per usual for The Goldbergs). Adam started off the holiday dressing up as a Rubik's Cube (I absolutely want that costume!). The Rubik's Cube is pretty synonymous with the 1980s which makes sense as it was sold internationally in 1980 after being created in 1974 by Hungarian Erno Rubik. So, that's pretty safe, since anytime in the 1980s could have birthed a Rubik's Cube obsession. Barry, however, dresses up as the Incredible Hulk (Lou Ferrigno style), and that TV show was on air from 1978-1982. Later in the episode, Pops and Adam get into their Ghostbusters gear — which didn't come out until 1984.

I guess all of the Halloween gear could work as long as Barry was dressing up as the Hulk even though it wasn't on TV anymore, but it's a bit of a stretch. Plus, with costumes as awesome as these (seriously, Adam gets two of the best disguises ever) I think they may have peaked (costume wise, anyway) in Season 1.

It's no secret that Adam Goldberg is a nerd, but he is seriously the most adorable nerd ever. I don't always love young actors, but Sean Giambrone is perfect as the excitable Adam. And as a kid growing up in the 1980s, he is of course into all of the big shows, video games, and movies of the time. Some mixes seem fine — it is conceivable that Adam and Murray would have never returned 1977's Slap Shot to the video store while trying to rent 1984's Indiana Jones and the Temple of Doom.

Adam loves He-Man and has a toy version Castle Grayskull (so did my brother!! It was sweet — you could even talk into a special microphone to change your voice and attempt to sound nothing like Skeletor). And although the animated TV show He-Man and the Masters of the Universe originally aired from 1983-1985, I remember being into He-Man myself and I wasn't born until 1986, so Adam could love He-Man no matter the year in the '80s.

(And since the real Adam Goldberg is from the suburbs of Philadelphia — like me — I really hope he knows about the Skeletor Karaoke Gong Show. I've had the pleasure of personally singing a duet to "Total Eclipse of the Heart" with Skeletor in Philly.)

And yes, Adam also loves Tron, the Star Wars franchise, The Goonies, and almost any other awesome thing from the 1980s (and late 1970s) you can think of. But don't let all of the heavy-handed pop culture references deter you from watching the show.

There is some genuine heart and some seriously funny moments in this sitcom — although the laughs don't come as frequently as with ABC's other family sitcom Modern Family. But if your memories of the '80s aren't so crystal clear (or you're willing to give some factual leeway in favor of nostalgia), The Goldbergs never fails to deliver.