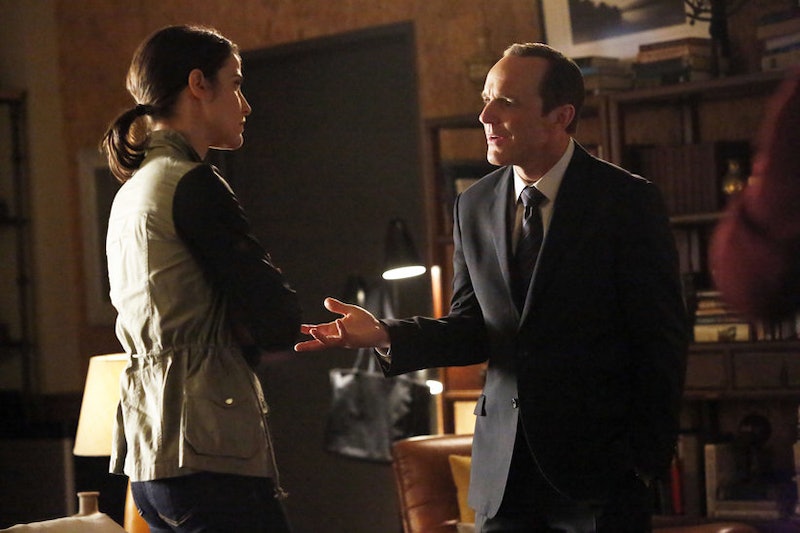 Flying cars and trading cards for everybody! Director Phil Coulson is in the building. The Agents of S.H.I.E.L.D. finale had explosions, reveals, Bill Paxton's turtleneck, and questions left unanswered. But one of the most satisfying emotional moments was a quiet scene between Coulson and Nick Fury. In the scene, Director Fury not only made Coulson director of S.H.I.E.L.D., but when asked why he brought Phil back to life using a technique they were saving for the death of an Avenger, he answered with one word: "Exactly." I'm tearing up just thinking about it! Coulson is an Avenger. You don't need super suits or superpowers to be a hero, and I think that's what Agents of S.H.I.E.L.D. is all about at its core.

Coulson has his work cut out for him. The Marvel Cinematic Universe is in disarray. Hydra has revealed itself to have been there the whole time. Ant-Man is a flip-flopping mess I can't keep track of. We'd all rather just watch Baby Groot. Agents of S.H.I.E.L.D. will premiere its second season on Sept. 23 on ABC and fans want to know how Coulson is gonna get us out of this. Is he even able to?

So, here's a thing. The Avengers still think Coulson is dead! This is important information! This is particularly important information for the members of the team who still consider themselves S.H.I.E.L.D. Agents. I feel like Natasha Romanov probably figured it out, or has clearance. She and Maria Hill are Nick Fury's top confidants. Yay feminism! Though that leaves Steve Rogers with yet another ghost in his life — and is anybody gonna tell Hawkeye? Does anybody know where Hawkeye is? Is he okay? Is he eating?

One other possible problem is the fact that alien blood may be getting to Coulson's brain. If you recall, Coulson was brought back to life using GH-325, a mysterious drug made from the mysterious blood of a dead blue alien. The final shot of last season showed Coulson mindlessly drawing out a complicated language, or schematics, or... something. The image has been popping up on promotional billboards. Is he going all Good Will Hunting on us? Or is he going insane? Bill Paxton's (H.Y.D.R.A.) Agent Garret also took the drug and experienced similar side effects. He also had some super strength and considered himself all-knowing. Clark Gregg mused to TVLine, “I think it’s interesting that Director Fury gave Agent Coulson this job, given that he still has GH-325 pumping through him... We don’t know 100 percent what he is, but we’ll see what happens. It’ll be an exciting Season 2.”

Personally, I think Director Coulson is a change we can believe in. He's idealistic, but not naïve. He's well connected. He's also well-loved and has a good support system. That's all we really need, after all. Coulson may be a little unstable, but he's no Voldemort.