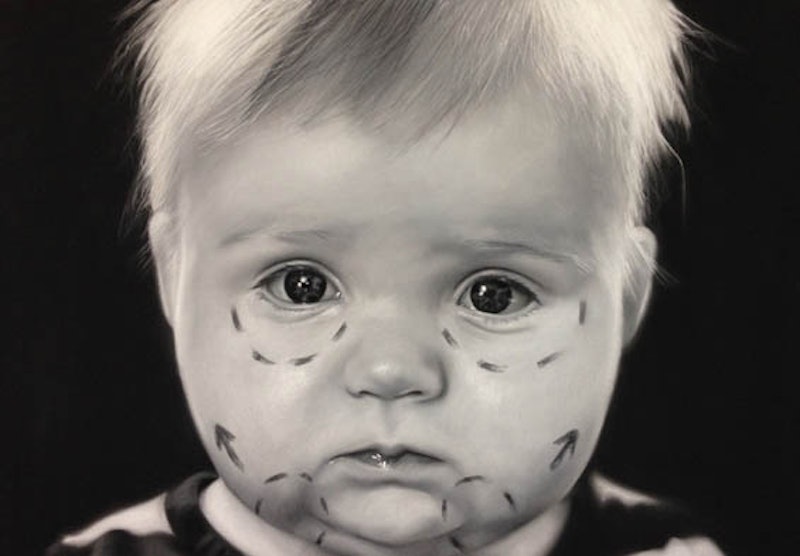 You need to look no further than Victoria Wild, the human sex doll, to know that people are going to absurd lengths to alter their physical appearances these days. British artist Oliver Jones’ “Love The Skin You’re In” photo series wants to draw this absurdity to our attention. The series is composed of subjects performing various beauty rituals, from placing cucumbers on their eyes to visiting the plastic surgeon, all in the name of obtaining more desirable skin and making themselves more beautiful.

The name of the series should sound familiar — it’s Olay’s advertising tagline. Some of the works themselves have names that refer to another brand’s slogan or other phrases that advertisers use to lure in customers, such as “3 Steps to Younger Looking Skin” and “The Best A Man Can Get.”

Jones' work portrays the chasm between what real skin looks like and what the skin in advertisements looks like, and shows us how those advertisements feed into our ideas of beauty, and how our beauty ideals have lent themselves to human vanity and obsession with appearance. Jones told The Birmingham Post, “Today’s science, coupled with commerce that appeals to society’s vain traits, means that humanity no longer has to leave everything down to nature. We feel that we also need to be part of the design.”

Though his images appear to be photographs, they are actually remarkably realistic pastel and chalk drawings. This medium allows him to communicate what the artist calls “a translucent sense of human fragility”. According to the Birmingham Post, this type of work is vulnerable to moisture and human touch, but can last for more than 100 years if properly cared for, much like human skin.

The most striking image in the series is of the artist’s daughter, Eve, marked as if she is about to undergo some sort of boutique plastic surgery for babies, entitled “Maybe She’s Born With It." This photo and the rest of the series are on display until October 25 at the Gusford Gallery in Los Angeles.

Maybe She's Born With It

Images courtesy of the Oliver Jones and GUSFORD|los angeles