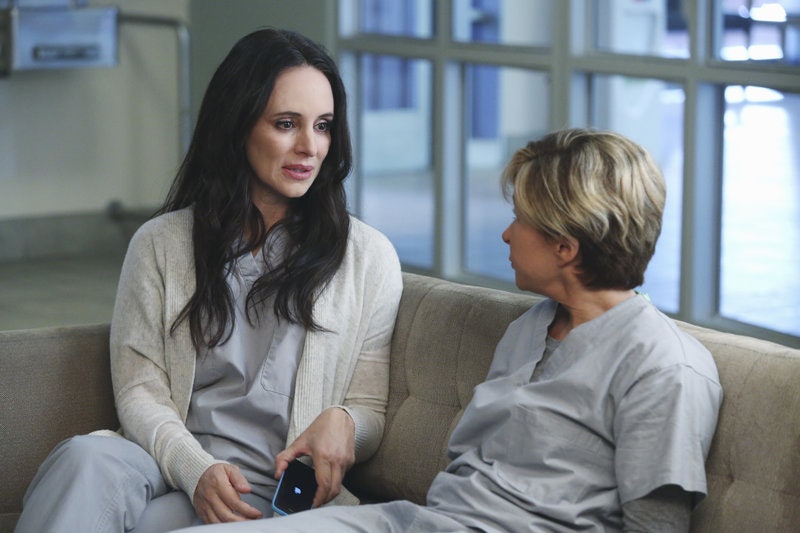 We should not be underestimating Victoria Grayson and, apparently, Emily shouldn't either. Revenge Season 4 is going to be all about Victoria's revenge, that much we already know. And in ABC's new Season 4 promo, we finally see what that might entail. Up until this point, we've heard the musings of a semi-mad woman and only seen Victoria within the confines of the asylum. The latest promo, however, features footage of Victoria wielding guns and showing up, unannounced, on the doorstep of Grayson Manor. So, for anyone who thought this was over or that Victoria wasn't a force to be reckoned with in Season 4 — including you, Emily Thorne — you've got it all wrong.

No Revenge fan was really that naive about Season 3's ending, right? Emily might have had Victoria committed and moved into her home, but she's far from being the queen of the Hamptons just yet. The premise of ABC's latest clip is "what goes around comes around" and that's exactly what's going to happen to Emily next season. While fans are waiting to see who David will reveal himself to first — his daughter or the former love of his life — Victoria's going to show Emily exactly what she lost as a result of her desire for revenge. In the promo, Victoria tells Emily that she could've known the truth and she could've "reunited with her sister," but instead she chose to take dedicate her life to seeking revenge for losing her father, a man we now know who faked his own death and never revealed to his daughter that he was actually alive — FOR YEARS.

In the past few clips of Season 4, it's seemed like Emily's taken for granted the fact that Victoria, with all of her accusations, is playing right into her hand at the insane asylum. But it's not going to take Victoria very long to realize what she needs to do to be released — I mean, after awhile she caught onto Emily's revenge game too. And as long as Emily's thinking she's crossed her i's and dotted her t's, Victoria's going to sneak up on her just fine, just like she does twice on this promo. Everyone on Revenge knew not to underestimate Victoria, but now they're going to find out just how unpredictable she can be and Emily should really be worried.