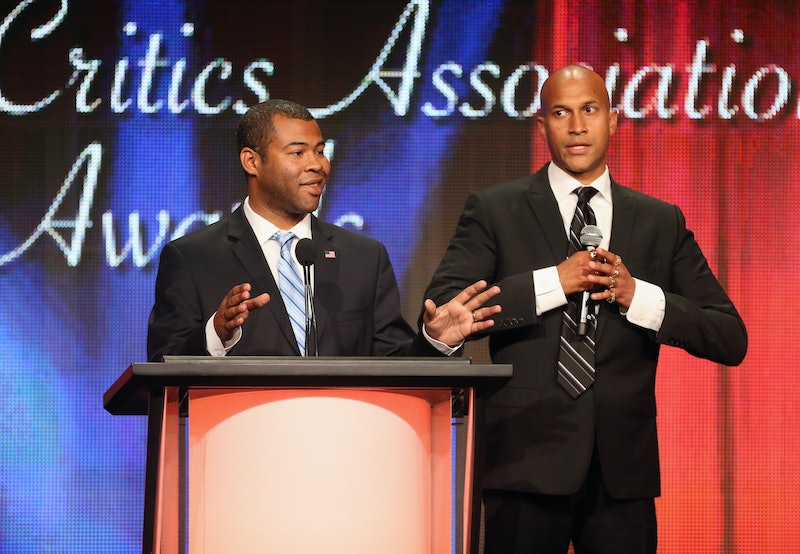 The summer of 2014 was a mess; so much happened, and we were missing all of our best sketch comedians to make fun of every dumb press conference, political gaffe, or celebrity disaster. But finally, fall TV is back, and while Saturday Night Live is the most famous sketch show, Season 4 of Key & Peele on Comedy Central is actually a better place to find sketches that have a take on topics too edgy, weird, or tough for SNL to get a handle on, be it finding a funny angle on Obama to poking fun at Liam Neeson's newfound action movie career. And since both Keegan-Michael Key and Jordan Peele are biracial, the show isn’t afraid to go after racial issues and never worries about diversity — any time they need someone to fill out the cast, they hire a day player or do it themselves.

Both Key and Peele are experienced sketch performers, having worked on Mad TV back in the early 2000s. And they’ve both been getting even more acting work in the offseason — they both appeared on the first season of Fargo on FX and Key was a recurring character on USA's Playing House. They can do impressions, they can make outsized characters, and they, more than anyone, can deal with all the Summer 2014 craziness. Here are the top ten stories from the summer that America needs to hear about through Key & Peele.

Obviously the tragic events that happened in Ferguson this summer were far from funny. But it brought up big questions about race, class, and absurdly overarmed police force, all things that Key & Peele are never afraid to go after.

The VMAs confirmed: it's all about butts. And, more specifically, the tension between white women who want to celebrate the trend like Iggy Azelea or Kim Kardashian, and black women in hip hop like Nicki Minaj who aren't going to sit back and let their culture be co-opted. Then, of course, you have JLo, the OG who just tossed out her new video for "Booty" to remind everyone even at 45 she can take them all.

This August, video game journalism came under attack… which turned out to be a movement orchestrated by members of online forums with the express goal of tearing down a female game designer. Peele's overweight nerd character Wendell isn't my favorite, but rather than yet another pizza sketch, he could be used for a commentary on angry nerd culture.

Maybe the guys don't look exactly like the members of U2, but they have to make fun of the Irish band trying to become the unofficial official voice of Apple. If the guys from South Park don't get to it first.

Between domestic abuse scandals, child abuse accusations, racist team names, and, over in basketball, old pucker-faced racist team owners, there is no more stressful time to be the commissioner of a sports league. And Key & Peele are more than equipped to turn out a sketch to speak to these issues.

Maybe instead of playing Beyoncé and Jay Z themselves, they could address the legion of hard core Carter fanatics who analyzed every paparazzi photo in fear that their beloved couple is about to split.

Maybe Key & Peele's favorite news anchor, Metta World News, knows where that Malaysian plane went, because no one else at CNN ever figured it out.

9. Guardians of the Galaxy

The summer's biggest blockbuster could lead to some inspired space opera parodies.

Luther needs to let us know what the hell Obama was thinking with this one.