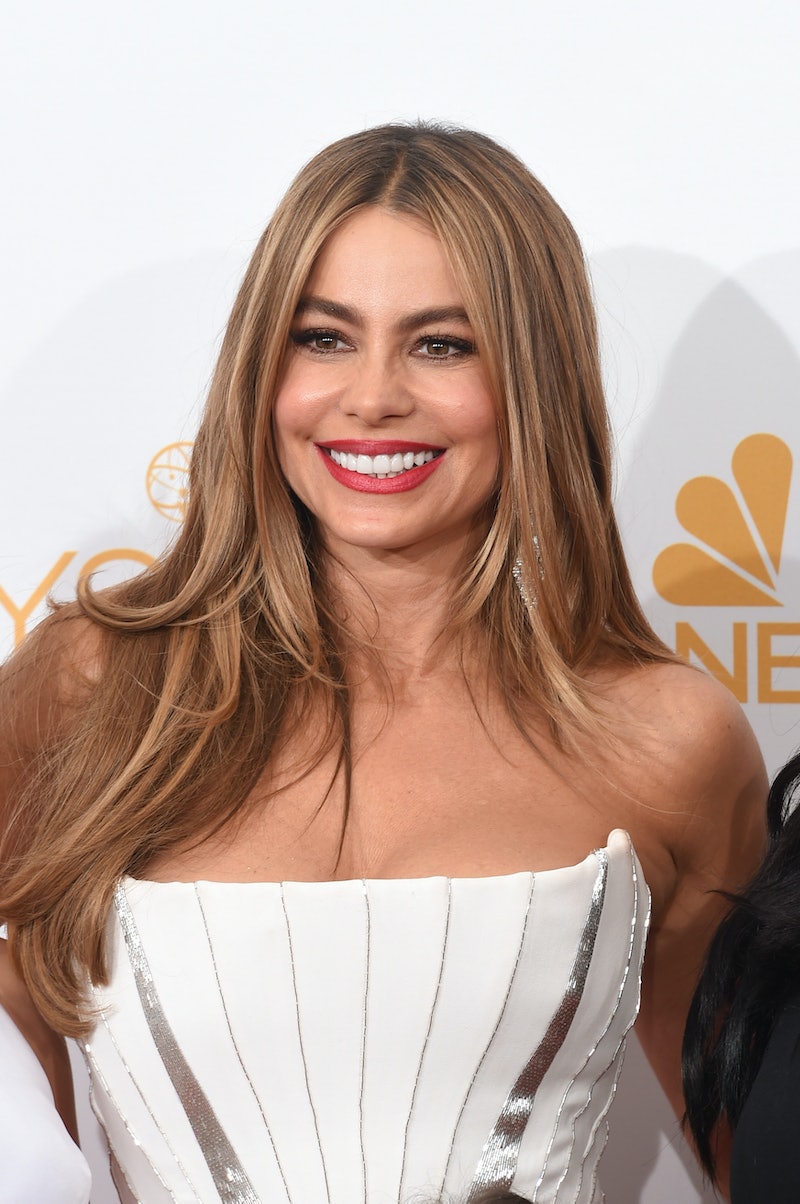 The cliche says it's usually love at first sight, but according to Modern Family 's Sofia Vergara, her boyfriend, Joe Manganiello, was first attracted to her smell. That sounds like something right out of Manganiello's True Blood character, but for those of us who aren't Sookie Stackhouse, most of the time hot vampires and werewolves aren't supernaturally drawn to our Tindr profiles because of the bewitching scent of our blood. Then again, it's probably just as fantastical to be Sofia Vergara as it is to be a New Orleans faerie superhero swamp waitress. But Sofia might have some ulterior motives… she's selling a new perfume, and has been promoting it along with the sixth season of Modern Family.

Sofia and Joe have been dating since the middle of August, or at least that's when she chose to make their relationship public. In kind of strange timing, she admitted to Extra that the two were together not weeks after Manganiello had said in an interview with People that she was his celebrity crush. At the beginning of their relationship, the two were photographed together frequently by paparazzi and seen all over Los Angeles together. "The two hottest people on television, and they're going out?!" had a good amount of supermarket checkout aisle tabloid allure. But now the rabid, celebrity couple-starved public has gotten used to the idea of Vergaraniello (attention: this is now the official portmanteau for their relationship), so lately, Joe and Sofia have been keeping things a little more private, and aside from the occasional mention of one another in an interview or a rare Instagram post, they aren't seen together that frequently.

Sofia didn't even bring Joe along to the Emmy Awards a few weeks ago, even though they're both on television and Modern Family cleaned up, taking home almost every single comedy prize. Her noncommittal response to Guiliana Rancic on the red carpet about his absence made it sound a little like they might have broken up. But Joe must just have been busy or Sofia must have a very low tolerance for Guliana, because they're totally still together.

Sofia recently Instagrammed a shot of them together in Seattle, where Joe was speaking for the Human Rights Campaign. And a few days ago, she posted a bunch of pictures in New York with one captioned "Hiatus work week in Ny!!! Missing my ❤️ already!!" which is super sweet.

It's been a tough summer for famous people in love. Michelle Rodriguez/Zac Efron? Split. After breaking up with Nicholas Hoult, Jennifer Lawrence apparently started dating Chris Martin, which is mystifying. Even Selena Gomez and Justin Bieber had their ups and downs. But Vergara and Manganiello are the only summer relationship that somehow seems poised to last. Unbelievably beautiful and their summer fling turned into a real deal relationship? They have it all figured out.