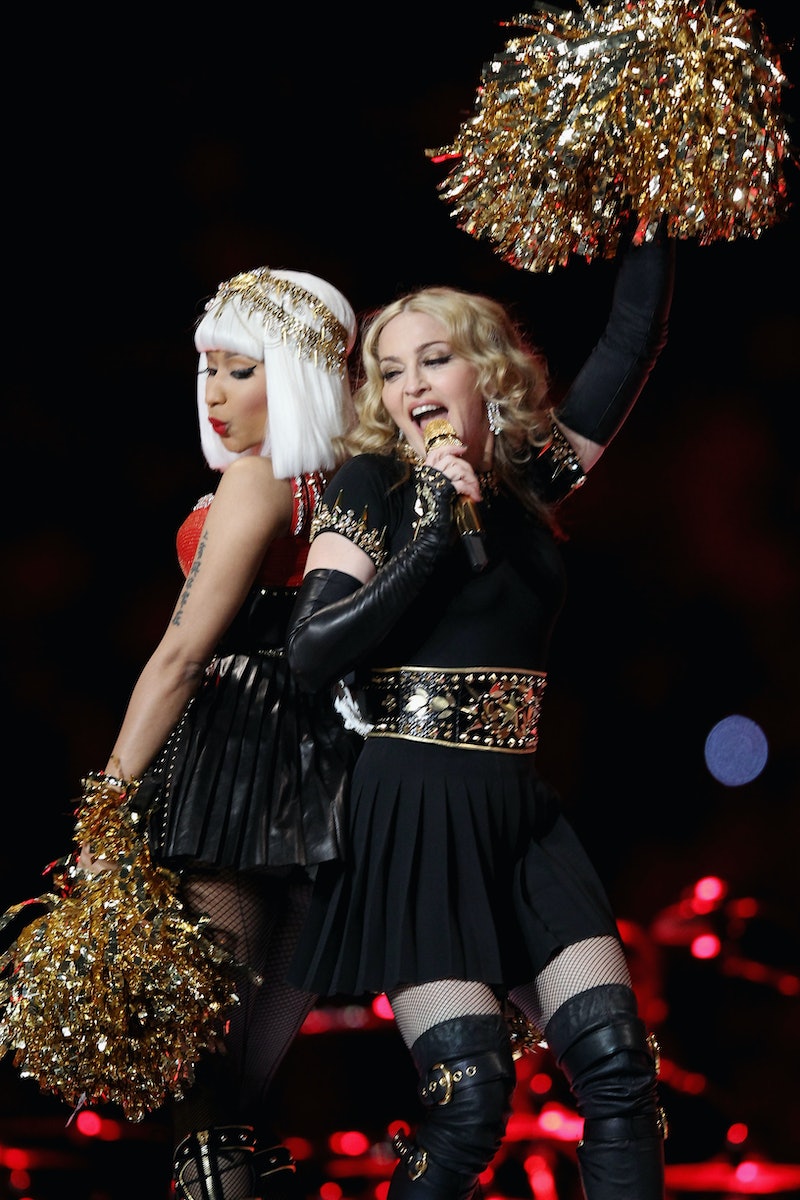 This new Madonna project just keeps getting more and more exciting! Last week, DJ and producer Diplo said that Madonna's new single was almost finished, and now, it looks like she might be recording a song with rapper Nicki Minaj for her new album. Minaj is featured on two tracks that appear on Madonna's last studio album, MDNA: "Give Me All Your Luvin'" and "I Don't Give A." If I'm being completely honest, I wasn't really thrilled with either song, but both Madge and Minaj are incredibly talented artists, so I'm definitely up for them giving this whole collaboration thing another shot!

So, why do I think that Madonna and Minaj could be working together again? Instagram photos, of course! For the past six months, Madonna has been chronicling the recording process for her upcoming 13th studio album on Instagram. This week, both Madonna and Minaj posted some suggestive pics to the social media site that have fans in a tizzy. (Last week, Madonna revealed on Instagram that she's teamed up with producers Blood Diamonds and DJ Dahi for her new album. The lesson here? Keep your eyes glued to Madonna's Instagram account, people! You just never know what you might find out.)

Here's all of the Instagram evidence that points to a possible Madonna/Minaj collaboration:

Heading to the Studio

Madonna said that she was "Goin to werk" on Monday and tagged both Minaj and Diplo in her photo. She also used the hashtag, "#bitchimmadonna." We learned back in July that Diplo wrote a song with Madonna called, "Bitch, I'm Madonna." Hmm. Could the trio have been working on the almost-finished first single that Diplo spoke about last week? Was Minaj there to lay down her verse?

Minaj shared the above pic and wrote that she "bumped" into Madonna in New York on Monday evening (likely story!). Madonna reposted the shot on Tuesday and added the caption, "We go Hard or we go Home we Gon Do this all night long! #werk." Some new lyrics, perhaps?

Madonna put up a snap of these unapologetic pillows on Tuesday afternoon, tagging both Minaj and Diplo once again. Oh, and there's that "#bitchimmadonna" hashtag again, too. (The phrase "unapologetic bitch" has also made quite a few appearances on Madonna's Instagram account lately.) I mean, Madonna and Minaj just have to be collaborating...right?

I'll be sure to keep you up-to-date as more details about Madonna's new album emerge!