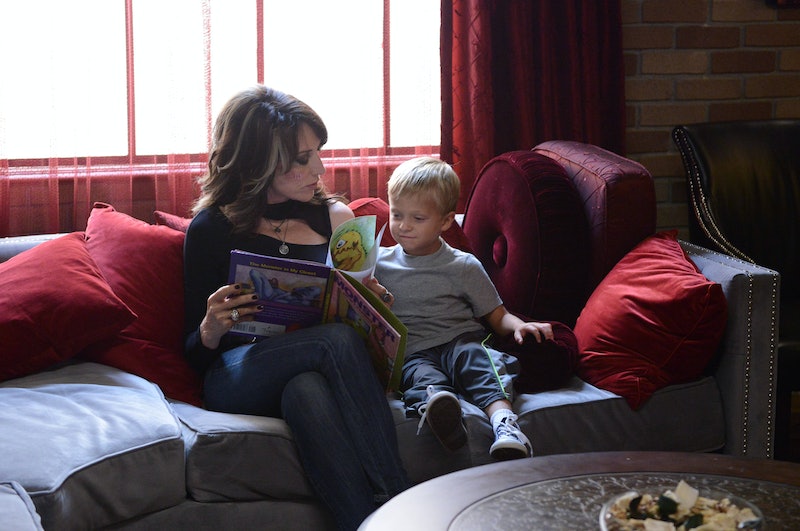 The last five seconds of Tuesday's Sons of Anarchy say everything. "Playing with Monsters" saw Gemma standing idly by while her son beat the father of one of Nero's girls to a pulp. And just like that, the SOA logo burned into the screen and the episode was over. In that moment, the title of the episode became clear. Jax and Gemma are the monsters now.

It would be easy to assume that the criminal elements throughout Charming and surrounding towns are the monsters. They're all playing sick games with guns, hard drugs, and each others' lives. Jax is baiting the near demonic August Marks, who claims he won his success with a wave of murderous rage — so he's a monster. Jax left his shotgun behind when trying to frame another club for striking the Chinese shipment, creating a monster out of a man who should be an ally. The club is running about murdering men to keep the blame finger shifting away from their own misdeeds, making them monsters. But it all stems from one place: Gemma.

Last season, Jax was trying to rid himself of his monstrous side. He forgave Tara, refused to turn on her, and agreed to give himself up to save his family. He was so close to doing the right thing and being the man he always says he wanted to be. Then Gemma lost her mind, went after Tara, and killed the love of Jax's life. In one fell swoop, she stole his sanity and his grip on his mission to remain a good man. Now, Jax is running all over California, spilling blood, and sewing his own grim fate. He's the maniac of a monster in the background, brutally pummeling a man for a crime that didn't quite fit the punishment. He's on auto-pilot. He doesn't even seem in command of his own actions. And in the end, it's actually Gemma's fault.

And what does that say about Gemma, the reckless person who created this monster? Not only did she turn Jax into his monstrous new self, but it was her finger-pointing toward Lin's innocent henchman that set all of Jax's irresponsible misdeeds in motion. Gemma has condemned her own son to death, because there is no way he's getting out of this one. Not this time.

And when she looks into Abel's innocent eyes and tells Jax's son that his father isn't a bad man, you know she means it. He is a good man somewhere deep inside, but Gemma also knows she's changed all that. Jax isn't a bad man somewhere under all his rage, but Gemma knows she's brought out the ugliest parts of him and the look on her face at the end of "Playing with Monsters" assures us she knows just as well as we do that this time, the damage is permanent.