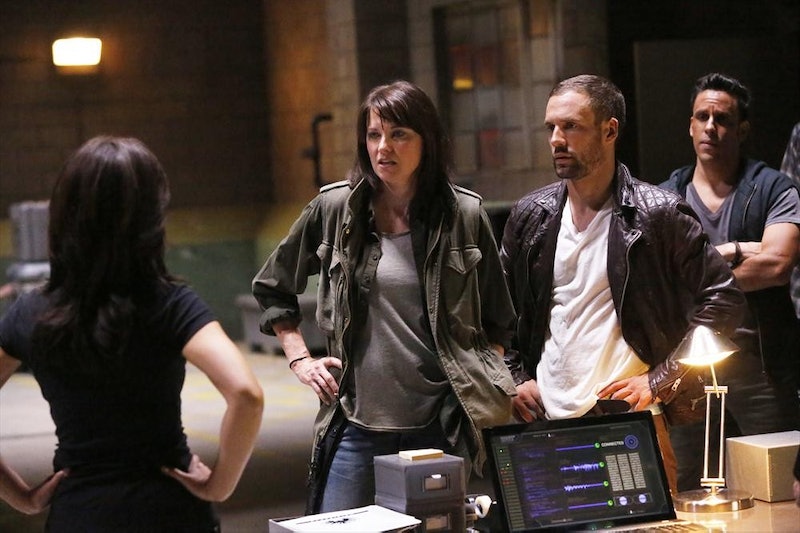 If you can momentarily tear your thoughts away from the shocking reveal that Fitz is slowly losing mind, a few other hugely important things happened in the Marvel's Agents of S.H.I.E.L.D. Season 2 premiere that need to be dissected. One newly introduced mystery that seems like it will have the biggest impact on the season, and possibly the rest of the Marvel Cinematic Universe, is the obelisk, the first 0-8-4 discovered by Peggy Carter that had such a horrible effect on Lucy Lawless' new character Isabelle Hartley, her partner had to cut her hand off to stop it. Seriously, what the hell is this thing?

One thing I can say with near-certainty is that it's of alien origin. Besides the fact that I've never heard of any terrestrial rocks that turn your skin into charcoal and cause it to develop odd markings, it was put away by the SSR (the precursor to S.H.I.E.L.D.) alongside a blue creature that resembled the alien that GH-325 is made of. You know what both of those creatures resemble? The Kree aliens seen in Guardians of the Galaxy . The markings it caused also seemed very alien and looked a lot like the strange symbols Coulson was inexplicably drawing at the end of the Season 1 finale. Considering the fact that he has GH-325 in him, those were probably alien too.

So what is this obelisk? When I saw the affect it had on Hartley, it reminded me of a few different things. The most recent image that sprung to mind was (spoilers for Guardians ahead) when Peter Quill and the rest of the guardians touched the infinity stone at the end of the movie. They were nearly killed by its power just from touching it, and an innocent assistant to The Collector was gruesomely killed by touching it earlier in the film.

It was also similar to what happened to Jane in Thor: The Dark World when she touched the Aether, and was stuck in midair with patches of her skin turning black. The Aether turned out to be an infinity stone. You know what else is an infinity stone? The Tesseract in The Avengers, the all-powerful cube Loki plans to use to destroy New York City. Anyone else seeing a pattern here? In Marvel comics, there are six infinity stones (called infinity gems instead), and so far we've seen three in the movies. If Agents of S.H.I.E.L.D. just introduced the fourth, that leaves two. Perhaps Ant-Man and Doctor Strange will get in on the stone-hunting fun?

We don't know what exactly the Obelisk is yet, but I'd bet serious money that it contains an infinity stone. There's nothing Marvel loves more than connecting all of its various properties, as evidenced by the cameos from Captain America's team in the beginning of the Agents of S.H.I.E.L.D. premiere, and almost everything else that has ever happened on the show. With this much attention, there's no way the obelisk won't have serious ramifications on future episodes of Agents of S.H.I.E.L.D. and even upcoming MCU movies. That's just not Marvel's style.