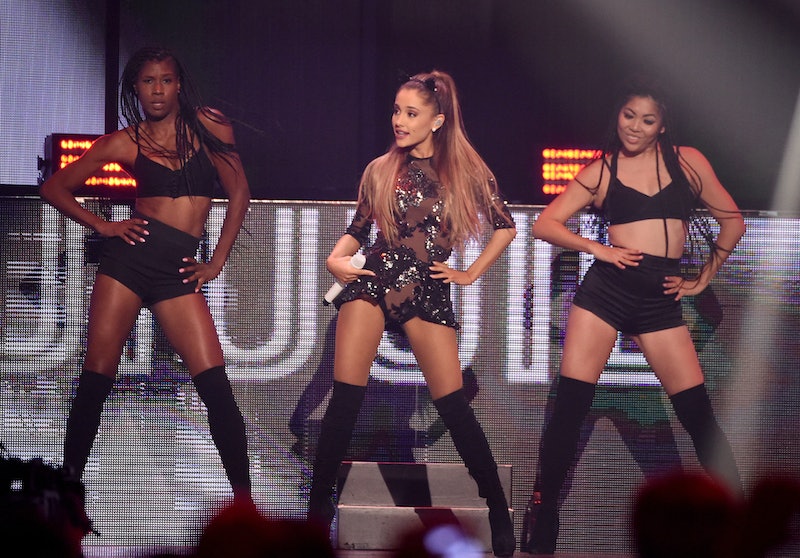 In case you somehow haven't heard, Ariana Grande has been the subject of a lot of wild rumors lately. However, all of those rumors have one uniting factor: Apparently, Grande is a diva of epic proportions. Not Mariah Carey epic, but she appears to be getting there if any or all of these stories are to be believed. From the rumors about Grande canceling photo shoots that don't go her way to the story that Grande's life coach quit due to her diva demands, it seems like Grande can't catch a break when it comes to press about her attitude. However, whether you believe the behind-the-scenes stories or not, there's no denying that there might be a grain of truth to the idea that Grande is at least a little bit of a diva. A good example is Grande's recent talk with TMZ about the nude photo scandal.

Catching up with celebrities in the airport is pretty much a TMZ trademark strategy and their approach was no different with Grande. When they found her, she was on the phone with someone. Whatever the conversation was about before the paparazzi showed up, Grande quickly cut it short and hung up the phone to give the reporters her full attention.

That might seem like a kind gesture to the reporter, but the abruptness with which Grande ended the conversation for a few minutes of media spotlight was a little bizarre. After all, it's not as though she's under any obligation to acknowledge TMZ reporters in an airport. In fact, she even sounds to have interrupted whomever she was speaking to mid-sentence and doesn't even say goodbye before hanging up the phone with "I'll call you back." Grande then ends the short interview by allowing TMZ to take some glamor shorts of her (from the left side, of course), before walking away with a kiss blown in their direction.

I'm not saying this is the be-all end-all of damning proof that Grande is the biggest diva who ever lived. I just find it kind of weird that she would cut off a phone conversation for an unwanted interview and photo shoot. When people spring out of nowhere and shove a camera in my face, my immediate response isn't to drop whatever I'm doing or whomever I'm speaking to in order to strike a pose. My immediate response would probably be to tell the cameras to wait while I walked off to finish my conversation or just plain walk away with an apology for not having the time to show them my good side, OK?

In addition, the paparazzo asked Grande about the leaked nude picture scandal again. Grande was one of the many celebrities who were victimized in the leak, but she was also one of the few celebrities who stepped forward to deny the pictures were really of her. However, Grande was criticized at the time for body shaming the girl actually in the photos, saying that it couldn't be her because her "lil ass is a lot cuter than that." Her justifications in this more recent interview aren't any better than that, to be honest.

Jennifer Lawrence, Kate Upton, Gabrielle Union, and the rest weren’t victimized because they took nude pictures. They were victimized because the hacker who invaded their privacy in such a gross way is probably a sociopath. To imply otherwise is victim blaming. Overall, no, this TMZ interaction isn’t proof that Grande is a huge diva and that every negative story printed about her in the last month or so is the gospel truth. However, it is proof that Grande should be a little more sensitive when she’s talking about the nude picture scandal. Sure, she can’t help what she’s asked about, but showing a little more sympathy toward the victims would go a very long way.