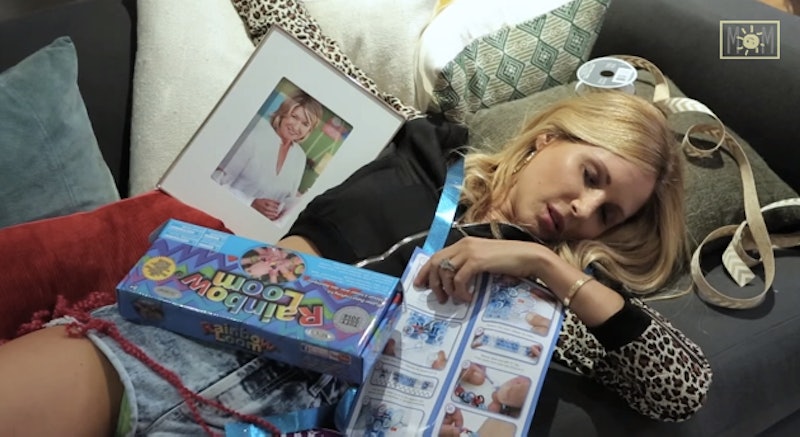 With the popularity of Taylor Swift's "Shake It Off" in full swing, we knew it was only a matter of time before parodies of the addictive single are would start popping up left and right. The latest one, however, might be the most hilarious of all — or at least it will be to anyone with a "DIY Stuff" or "Crafty Crafts" board on Pinterest. What's Trending recently posted WhatsUpMoms' "PINTEREST PARODY" of Taylor Swift's "Shake it Off" — a video that pokes fun at the people obsessed making those pin-able DIY projects.

In the video, which stars Brooke Mahan, a regular over at WhatsUpMoms, a mom sings about her over-the-top obsession with pinteresting crafts and recipes. From making "no-sew tutus," to buying "84 Mason jars on a whim," to even comparing herself to her number one idol, Martha Stewart, it's clear that Mahan "might have a problem." She even sings about how her kids look at her like she's "cray, cray, cray, cray, crazy" because of her projects in the song's chorus. Then, there's the epic breakdown — as in, the part Swift's song where she warns us about stressing over "the liars and the dirty, dirty cheats of the world." Check it out Mahan's take on it:

While you’ve been out and about…

A mirror out of spoons.

And OMG I just got a Rainbow Loom.

And to the mothers over there with the hella good hair

Won’t you come on over later

(Because nothing says "Guys, I seriously have an addiction to Pinterest DIYs" like making a mirror out of utensils or a purchasing a "Rainbow Loom.")

The best part? Mahan is actually crafty in real life. On her WhatsUpMoms page, you can watch the singing mom make several DIY projects, like homemade play dough and Mason jar hacks. And, of course, Mahan has quite the hands-on Pinterest account (she has an entire board dedicated to Ikea Hacks that I definitely just followed).

No idea what's going on because you're not into Pinterest? Fortunately, there are plenty more "Shake It Off" parody videos in the sea. Like the "Shake It Off - Senior Citizens Edition" — because who doesn't want to see folks living in a retirement home get down to that "sick beat?" Barely Political also took a harsher stab at the song with their parody, which focuses on cracking jokes about Swift as a person (like I said, it's harsh).