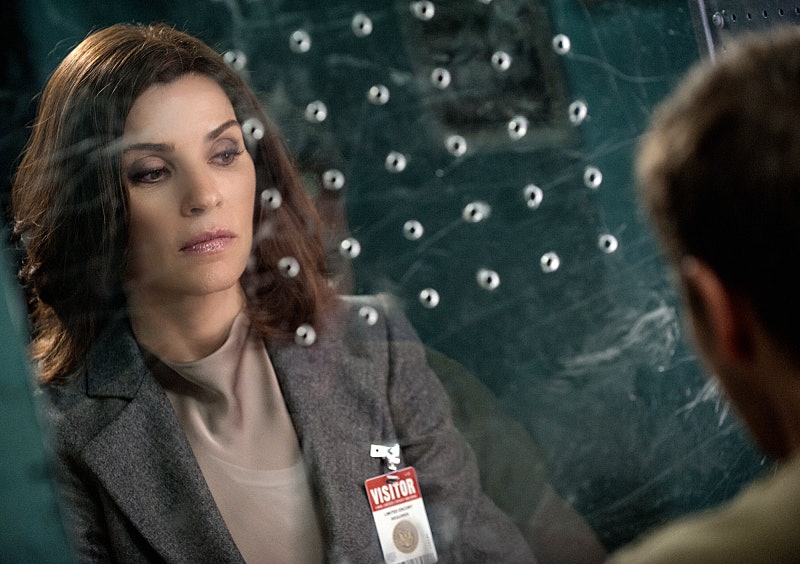 To say that Season 6 of CBS's The Good Wife premiered with a jaw-dropper of a premiere would be an understatement. For those afraid that the show couldn't top the edge-of-your-seat suspense of such terrific Season 5 episodes as "Hitting The Fan" and "Dramatics, Your Honor," those fears were put well to rest by "The Line." Cary was arrested! Finn is prosecuting him! Lemond Bishop is terrifying! That intern isn't wearing any panties!

OK, so there was some humor in the episode too... but that doesn't make me any less nervous about Cary's fate. He's way too pretty to last long in prison, right? Alicia and Diane will get him out soon, right? Surely Bishop won't have him taken out, right? Right?? You guys, I need something to help calm me down. Maybe the title of the second episode will give us hint that everything's going to be fine for Cary. Maybe it'll be called "He's Free!" or something similarly jolly. Let's take a look:

Like Florrick/Agos needs more obstacles to run up against. Come on, writers! When is Saint Alicia going to catch a break? Her old crush was murdered, her partner was arrested, her new crush is working the case against him, her old firm is trying to scuttle her new one, and now apparently she can't trust anyone. Yeesh.

Maybe things aren't as bad as they sound. What does the episode description have to say?

Alicia scrambles to hold onto Florrick/Agos' biggest client as the firm continues to struggle with an internal legal crisis. Meanwhile, Diane continues to plot her move from Lockhart/Gardner and looks for partners to bring with her to the new firm

So who's having the titular trust issues? There are so many possible permutations it's almost hard to narrow it down. In the season premiere, Alicia stuck steadfastly by Cary's side — Could she start to doubt his innocence? Kalinda is gathering evidence for Cary, but their relationship was already strained by the revelation that she was sleeping with him to get the scoop on Florrick/Agos for Diane — can Cary trust Kalinda enough to let her help him? Obviously, Louis Canning and David Lee don't trust that Diane is actually retiring and are working to undermine her relationship with her clients — will her clients mistrust Diane enough to stay at Lockhart/Gardner instead of following her to Florrick/Agos? Eli is afraid that Peter is having an affair with his pantie-less intern — does he trust his friend enough to risk another potential scandal?

And then there's the matter of Taye Diggs' new character, Dean Levine-Wilkins, who makes his first appearance in this week's episode. Reportedly, Dean is an equity partner at Lockhart/Gardner who follows Diane as she jumps ship to Florrick/Agos — but knowing so little about this new addition to the cast, it's hard to fully trust his motives. Is he really on Diane's side? Or is he just pretending to be so he can spy on her for Louis and David?

Of course, The Good Wife being a courtroom drama, you have to consider the word "trust" in its legal context as well. In law, a trust is "an arrangement in which someone's property or money is legally held or managed by someone else or by an organization (such as a bank) for usually a set period of time." (Thanks, Merriam-Webster.) OK, so we're not sure yet how exactly a trust will tie into the episode's plot, but it's no secret that money is a huge concern for Florrick/Agos at the moment. Maybe Alicia will have to dip into her children's trust funds to pay for Cary's legal fees?

One last thing to think about: While spunky startup Florrick/Agos may seem like one big happy family, what if the trust issues come from within their own ranks? Season 5 introduced Ben Rappaport as Carey Zepps, a Lockhart/Gardner lawyer who defected with Alicia and Cary. While Zepps' and Agos' given names were mined for a few easy laughs early on, the decision to give two characters identical names has never stopped feeling random. But what if it wasn't random at all? What if this plot was the reason? What if — bear with me — Carey with an "e" is the one who told Bishop's men how to evade capture, and the Justice Department is going after the wrong man? Cary seems so sure he's innocent, and Finn seems so sure he's guilty. Could this whole case just be a massive case of mistaken identity? If so, expect the revelation to sow dissension among the ranks at Florrick/Agos. "Trust issues" indeed.