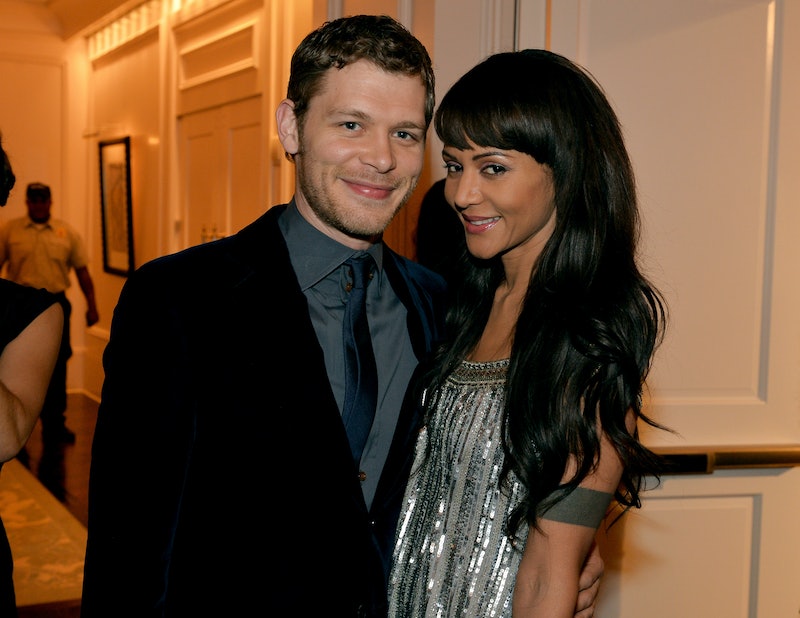 Apparently joining the cast of a CW TV series is better than eHarmony or Tinder these days, and leading the CW love connection train is the hit show The Vampire Diaries. We have all heard about the now defunct romance between Nina Dobrev and Ian Somerhalder. Then there's there's the former coupling of Paul Wesley and Torrey DeVitto (they were married up until their split in July 2013) and the current coupling of Paul Wesley and Phoebe Tonkin, but now there is another supernatural couple that has stolen the hearts of vampire lovers everywhere and piqued their interest: Joseph Morgan and Persia White. Morgan and White got married in a beach ceremony in the romantic setting of Ocho Rios, Jamaica on July 5, 2014 in front of a small group of family and friends. This was especially fitting since they both grew up near the ocean. I'm so happy for these two and it's nice to see a couple in love, but I can't just leave it at that. What's the story behind the story? How did Joseph Morgan and Persia White meet? Was it love at first bite? Lame vampire jokes aside, let's break down the romance of these newlyweds.

Of course, it all started here. The duo met on set in 2011 during the third season of The Vampire Diaries. Joseph Morgan was playing the role of Klaus, one of the original vampires, and Persia White portrayed Abby Bennett Wilson, a witch and the mother of central character Bonnie Bennett.

Morgan's character Klaus got his own spinoff, the CW hit series The Originals and White has only been on six episodes of the Vampire Diaries so there was not a lot of overlap there. The two worked together outside of the television show when Persia White starred in Morgan Joseph's ten-minute short film Revelation.

The two did not publicly confirm their romance for some time, but they definitely left some clues for the fans. They had been spotted by paparazzi and even walked the red carpet together at the 52nd Monte Carlo TV Festival in August 2012 to promote their short film. They remained coy during the promotional circuit, although they posed for photos and participated in interviews together. Check out the video of a 2012 interview they did to support Revelation and see if you can see the signs of a romance brewing. White also showed up at the CW Upfronts 2013 when Joseph was promoting The Originals. She has no role in the show, so it seems obvious she was there to support him. Oh, and they were spotted holding hands.

By 2014, the duo was more open about their relationship, not only confirming their status as a couple, but even flaunting their cuteness. Morgan tweeted "Happy New Year from @RealPersiaWhite and myself" with a photo of the pair ringing in the new year. Morgan wasn't the only one showing social media support, White tweeted "Ahhhh!!! I can't wait to watch THE ORIGINALS tonight! The best new show on TV. yeah I said it. @cworiginals #theoriginals #Klaus.”

Morgan proposed to White in May 2014 just days before his own 33rd birthday. The couple released a joint statement saying, "We really appreciate those of you who have supported our wild, creative, passionate and unlikely relationship. We have found a rare and precious thing; true love. We wish you all the same."

And now, here we are with a newly married couple and another CW relationship on the list.