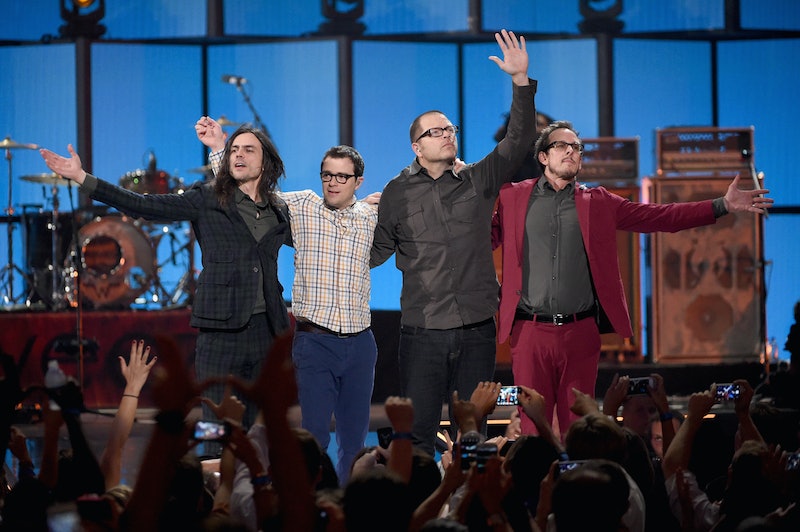 It's almost here, Buddy Hollys and Mary Tyler Moores! Everything Will Be Alright In The End, alt-rock band Weezer's ninth full-length studio album, will drop Oct. 7 (yes, that's a week later than its original release date). You could listen to Weezer’s upcoming album via CD or digital copy. That totally works. OR! You could, as MTV.com pointed out, snatch up an Everything Will Be Alright In The End cassette. Pretty dope, huh? There are limited copies of the cassette, so if that's your jam, get on that ASAP. The special edition cassette is available for pre-order Sept. 26 through Burger Records.

If you’re going to listen to EWBAITE via cassette tape, why not go all-in on the ‘90s Rewind (har har har) Experience? Get into the mood, dude! Sure, you could just listen to it while you text on your iPhone 6 Plus and eat a Cronut... but what's the fun in that? Commit to what the cassette represents: A bygone era.

To get into the '90s spirit of the cassette, as well as the spirit of the album being produced by Blue Album producer Ric Ocasek, I've drummed (har har har) up a little listening guide for ya.

First things first: Get your mitts on a cassette player

Stick Some Glow-in-the-dark stars on your ceiling

Plug In A Lava Lamp

Crack open a can of Surge

Hey, it’s back! Just in time for the Everything Will Be Alright In The End special edition cassette release!

Just Let Your Hair Do Its Thing

Don’t worry about putting any product in it or styling it, my friend. Let your coif air dry.

Toss on a Tattoo Choker

If you find the plastic necklace to be uncomfortable, a velvet choker is an aces replacement.

I mean, you don't have to bounce the entire time you listen to the tape, but it's nice to have the option when the mood strikes.

Spray Some CK One On Your Pulse Points

A Pen or Pencil

It's good to be prepared for any potential tape snags. Sure, your pinky can wind the tape back up, but using pen or a pencil won't leave teeth marks on your digit.