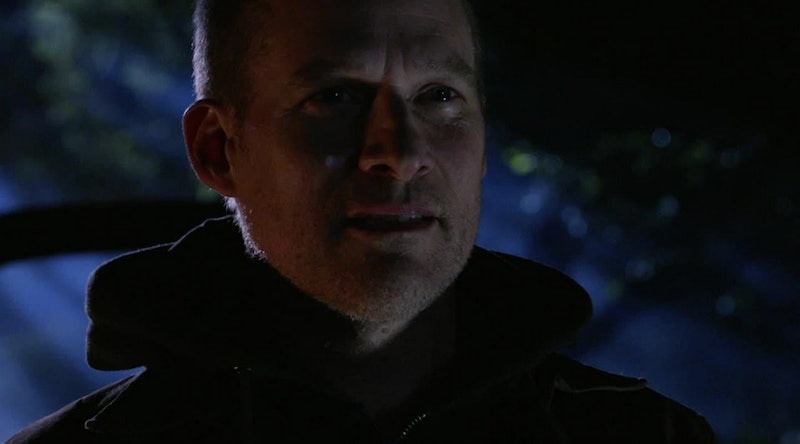 Revenge fans aren't going to have to wait too long for the Clarke family reunion. The series' Season 3 finale ended with the David Clarke bombshell cliffhanger as we were left wondering how and why Emily hadn't found out that her father was alive. And, more importantly, why David Clarke didn't find his daughter after he'd escaped from jail — that's some of the worst parenting I've ever seen. With Revenge Season 4 becoming The Victoria Grayson Show when it returns on Sept. 28, I was certain that it'd take us awhile to get around to the David Clarke question. But a huge Revenge Season 4 spoiler in the Episode 3, "Ashes," synopsis reveals that we might actually get the Clarke family reunion sooner rather than later after all.

Spoiler site CarterMatt posted a short synopsis for "Ashes" on Wednesday that revealed a few things about the third episode of Season 4. "Emily's life is on the line as Victoria orchestrates a family reunion with deadly potential, regardless of who gets caught in the crossfire," the synopsis reads, so now we know for sure that Victoria will probably spring herself from the insane asylum by this point in Season 4. Now, this "family reunion" part can go two ways — Victoria's getting the Grayson's together so she can kill Conrad for murdering Pascal OR Victoria's getting the Clarke side of her family together for some secret-sharing.

At this point, just ahead of the Season 4 premiere and with a few sneak peeks under our belts, both of these options seem wildly possible. Which I guess is what's keeping me interested in Revenge even though Season 3 was kind of a letdown. In a sneak peek from the premiere of Victoria and Emily's first conversation in Season 4, Emily reveals that Conrad murdered Pascal, not her, to a hysterical Victoria. Whether or not the Grayson matriarch believed her, we aren't sure, but if she did that gives her a good enough reason to want to kill her estranged husband (if he survived getting stabbed by David, of course).

But will Revenge choose to ignore its David Clarke problem in favor of making Victoria a killer again? We all know she's capable of murder already (RIP Aiden), so it's not like it'd be a revelation about her character that she's willing to kill Conrad. Victoria hates Conrad almost as much as she hates Emily and Nolan. Which leads me to believe that maybe, just maybe David Clarke will reveal himself to Victoria before he reveals himself to Emily. And Victoria will set up a little Clarke family intervention with Emily, Charlotte, and their shared father to get all of the secrets out into the open. In one of the more recent promos for Season 4, Victoria tells Emily that she "could've known the truth," so maybe that's exactly what she's going to give her in this moment. Though I can't see how this would be "potentially deadly," unless its connected to the shot in the Season 4 trailer of Charlotte standing on the edge of a roof, looking like she might jump.

Both of these families in Victoria's life are in volatile and uncertain places right now, but the David Clarke question is the biggest one facing Revenge Season 4. And it'd be a waste of an opportunity for the series to not have this "family reunion" include him reuniting with Emily after all of these years. Right? They also really need to explain why David stayed hidden all of this time and let Emily fall down the rabbit hole of revenge. Because that's so screwed up.