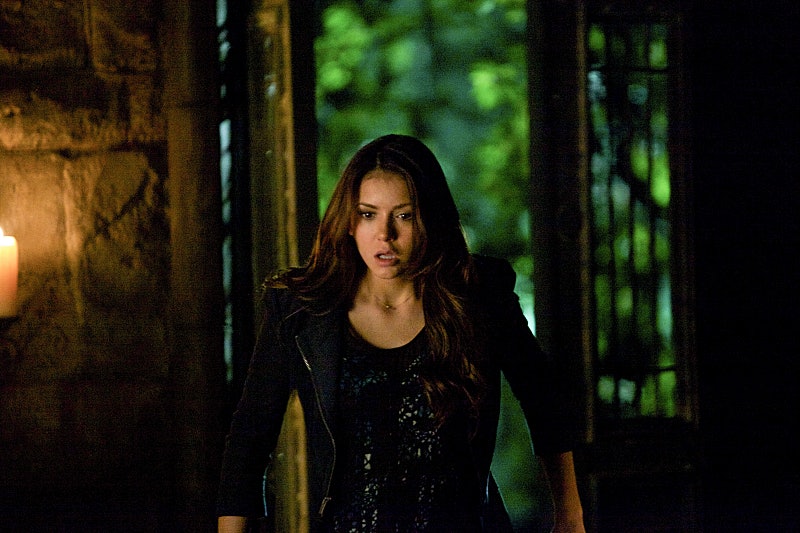 When Julie Plec first announced that a Vampire Diaries and Originals crossover was definitely happening, fans and writers alike immediately took to the Internet with theories as to how these Mystic Falls and New Orleans characters could once again find themselves in each other's path. But in true Plec form, she's managed to keep which characters would be making the transition pretty much under wraps and shrouded in mystery… until now that is. That's right, folks — after months and months of speculation and guesswork, we're finally getting some answers as to how this crossover idea will go down. However, it may not be the plot twist you were hoping for.

Plec recently sat down with E! Online and revealed that none other than TVD 's Nina Dobrev will be the one heading to The Originals during the show's fifth episode of its second season. But here's the big twist — it won't be Elena Gilbert that she's playing, which many diehard fans know can only mean one thing: we're back into doppelgänger territory. Dobrev will be taking on the role of the original doppelgänger Tatia, who was briefly mentioned way back in TVD's third season during a sit down dinner between the Mikaelson and Salvatore brothers.

For those of you in need of a little refresher, both Klaus and Elijah were in love with Tatia, but she was killed by their mother Esther in order to complete the spell that would prevent Klaus from becoming a hybrid. (Mothers, amirite?) "There's lots of secrets and scandal and romance and terrible tragedy attached to her character," Plec explains to the site. "We'll get to go back into the past to see how that all played out."

And while that isn't to say this will be the only crossover to happen this season, one can't help but be slightly (OK, fine, greatly) disappointed in this story arc. For one thing, many TVD fans thought we were completely done with all the doppelgänger drama, so carrying it over to The Originals just seems a bit unnecessary. Not to mention the fact that there were a TON of better ways to go about making a crossover happen. Such as…

Admit it, this would've been way better than introducing a long-lost love triangle from the past. Fans have already experienced the perilous journey of two brothers loving the same woman, so there's really no huge desire to go down such a similar road. A Klaroline reunion, on the other hand, is something I wouldn't mind watching over and over again. Just saying.

As we all know, Damon and Bonnie are no longer in the land of the living. In fact, we really don't know where the hell they are at all now that the Other Side has been destroyed. I feel this would more than warrant a call to their Original friends aka the most powerful vampires in existence. Having Stefan, Elena, and Caroline make a New Orleans road trip would make total sense if it meant finding a way to bring Damon and Bonnie back. Esther has even been reincarnated (though Klaus and Elijah don't know that yet), which I wager would more than help speed the rescue process along. It would've been perfect. (*Sighs*)

Granted, I know she's not technically on The Originals anymore, so maybe this couldn't exactly count as a crossover, but I'd still love to see her make a surprise appearance to Whitmore College and give our TVD characters a proper taste of college life. Something tells me Rebekah would've made a kickass sorority sister. And since she's also the current guardian of Klaus and Hayley's daughter, Hope, it would've given the rest of the gang (Caroline especially) the chance to meet her. Though I'm not sure our ovaries could handle watching Stefan or Matt or Jeremy hold a tiny baby. Our televisions might implode from adorableness.