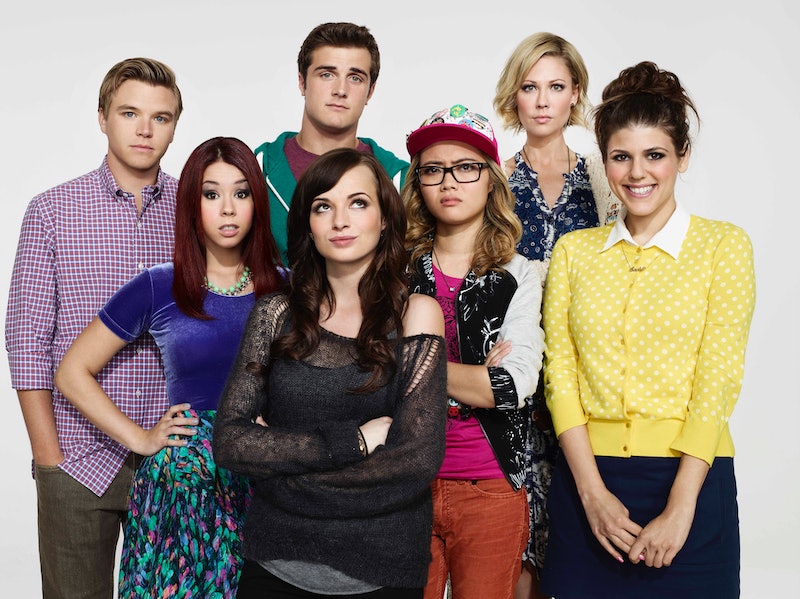 After many years of Teen Mom and The Jersey Shore, MTV finally brought us a show that isn't terrible. The series has enjoyed a four season run, but since Awkward Season 5 has yet to be renewed, I am beginning to panic about how and when the series will wrap up. An Awkward Graduation is approaching and then the kids of Palos Hills High School will be heading their separate ways for college. While I like to entertain the idea of following them off to college, that transition would have to be prepared in a way that was far better than Glee's idea of following the cast after high school.

I have been researching and hoping that they would announce a Season 5, but so far there is not even a whisper of Awkward's post Season 4 fate. Bustle reached out to an MTV rep and she confirmed what I had been dreading: "Nothing has been announced for Season 5 yet," she told me in an email. Of course, "yet" is the operative, three-letter word that is keeping my hopes high for an upcoming renewal for Awkward.

After all, we need to find out what happens if they don’t continue: Will Matty and Jenna stay together? Honestly, I will be livid if there is no conclusion to the main storyline. With Season 4 ending in a mere nine episodes, I just don't feel like we have a clue as to what’s coming next. Luckily, there is a little bit of evidence floating around.

Back in March, MTV announced that the previous showrunners had left the show and were being replaced by Mike Chessler and Chris Alberghini. In an interview with Buzzfeed, Chessler and Alberghini talked about Season 4 and gave us four very important clues into the future of the show:

Here's what we hope for the future of Awkward: Season 5 takes us through the Palos Hills graduation. That is followed by Season 5.5, which will take us through the beginning of the summer. Season 6 might be stretching the show past it's time, but a sixth season could finish the summer and push them into college.

Do we really want Awkward to go through the college years? The answer is probably not, because Matty and Jenna can't go on and off forever. It's too repetitive and you can't get rid of Matty because Awkward wouldn’t be Awkward without Matty McKibben.

The good news is, high school isn't over for the kids of Palos Hills. They haven't announced the next season yet, but let's be honest with ourselves: it's coming. They can't kill a show after four seasons with no closure and the ratings are still above a million an episode. Plus, since the showrunners didn’t prepare for closure, it's a pretty sure bet we will be seeing our favorite characters around in the spring for finals and graduation. And if I get my way, with graduation comes prom, and prom brings the much-needed reunion of Matty and Jenna.