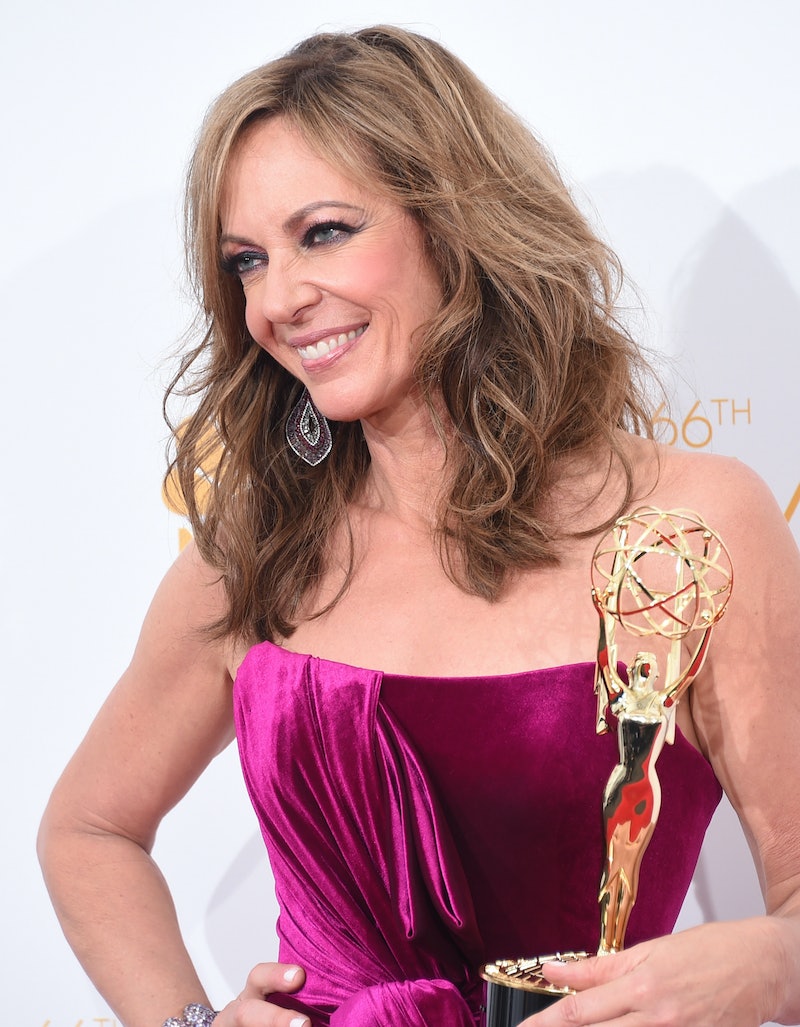 In one of the bigger surprises of this year's awards, Allison Janney won the Outstanding Supporting Actress Emmy for Mom and that same night, took home the trophy for Outstanding Guest Actress for her role on Masters of Sex — though that second win wasn't so shocking. That two-tiered win was as statistically unlikely as it was surprising, as most fans of one show have barely heard of the other. And the Chuck Lorre-produced Mom may not be known for producing award-worthy writing or direction, but an actress like Janney is known for turning even mediocre material into gold.

No one else could have brought The West Wing's badass press secretary C.J. Cregg to the screen, imbuing the tough character with femininity without ever resorting to stereotypes. She's led the way for other amazing, nuanced female characters like The Good Wife's Alicia Florrick, Olivia Pope on Scandal, and Viola Davis' terrifying law professor Annalise Keating on How to Get Away With Murder. Actually, there's probably an example of at least one unapologetically awesome professional woman on almost every single acclaimed drama from the past few years (save True Detective , at least until Season 2).

After wrestling with the words of Aaron Sorkin (and his imitators on the West Wing staff) for seven seasons and always coming out on top, Janney has been bouncing back and forth between guest starring on TV series and doing great work in thankless parts in movies like The Help or Get On Up, which both had her play an uptight Southern white woman who learns how to loosen up through the (trope-fueled) power of inspirational black people.

But the question isn't if Janney deserves to be a repeat Emmy winner — absolutely. It's whether Mom has provided her with any outstanding moments that were good enough for her to deliver the best supporting TV performance of the year. And there's only one way to find that out: examine the evidence. Can five of the best moments from Mom stand as some of the best of the year?

Just So You Know What We're Dealing With

This show includes such elements as people falling off of porches, people hitting things with bats, and Badger from Breaking Bad.

She Can Play Drunk

It's hard to play high or drunk without overdoing it, especially for comedy. But even though the scene itself is incredibly over the top, somehow she manages to do a reasonable amount of acting underneath the bad makeup and hair, weird camera angles, and zany music.

She Knows Her Character Is Tragic

To be honest, there aren't that many clips of Mom online, and this one my have been uploaded soley because it features bare feet. Don't get grossed out! This scene showcases the tragic underpinning of Bonnie's character. And Janney can transition so quickly from real, low-key glumness back to cracking dirty jokes in a fraction of a second without giving the audience whiplash.

She Can Make Anything Work

Ahh, the older woman going through menopause trope. She sweats a lot, throws stuff, and yells at everyone, right?! Well, that's what you probably think if writing for a somewhat cliche multi-camera sitcom, but if you're lucky enough to have Janney in your cast, those cliches will never seem fresher.

That speaks for itself.

The verdict? Janney more than earned her Emmy for Mom, and it's worth checking out just for her performance, as well as Anna Faris doing some of her best work in years as Janney's straight man/daughter. But Mom hardly deserves to even have her in the cast, and hopefully Season 2 will bring her better material to work with now that she's Emmy-approved.