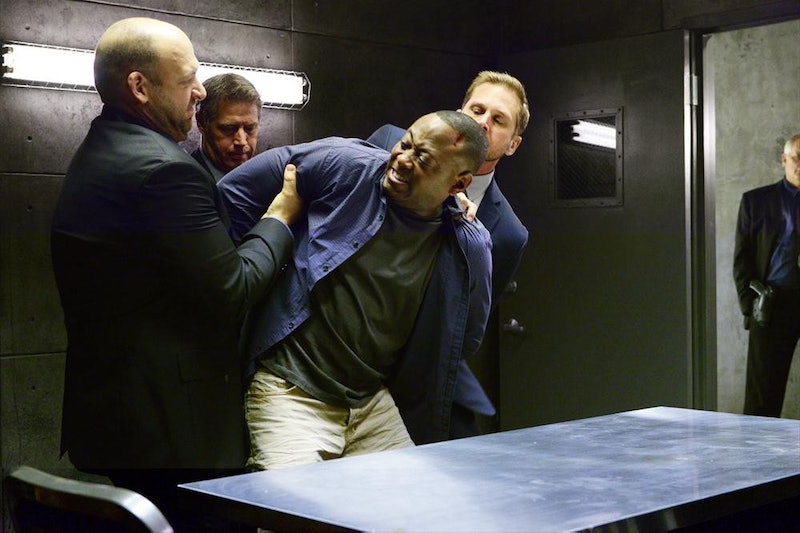 Was that a really cool plot twist or a lame storytelling shortcut on Resurrection 's Season 2 premiere? I still can't tell. J. Martin Bellamy spent most of the premiere being told what happened since the events of the Season 1 finale, when his attempt to escape with Jacob was stopped by a mysterious government caravan, and I was skeptical. Why must Maggie tell us that the returned who had family in Arcadia were released while the others were taken away? Why didn't the premiere show us that instead of spending more time on the insufferable Sheriff Fred? But when it was revealed that Bellamy died while being interrogated and returned just like the others, I was a little more on board.

Not that I didn't see it coming. The opening shot of Bellamy waking up in the middle of a field with a chunk of time missing from his memory was reminiscent of the stories every single person who returned told their families, so as soon as the mysterious woman in his house asked Bellamy if he really didn't remember, that was just the final puzzle piece falling into place. However, Bellamy's lack of memories wasn't the only puzzle that needed solving.

The biggest mystery left at the end of the premiere was who took Bellamy in the first place? He said it was a government agency he'd never heard of, and they brought Jacob back to his parents relatively quickly, seemingly unharmed. The mysterious woman also told Bellamy that the other returned were "safe... for now." It's ominous, but makes it sound like her organization ultimately wants to help protect the returned and that seems to be why they're interested in Bellamy. While he obviously still has good reason not to trust them, he may not have a choice at this point. I want to know where they took the rest of the returned as much as Bellamy does, and it sounds like we may finally get some answers if he agrees to the woman's deal, that he report back to her organization about the returned who stayed in Arcadia.

The premiere left us with one other mysterious detail at the very end of the episode. After Bellamy was killed during a fight with one of the men who was detaining him, we flash to his body in a morgue. But not the cold, sterile, white room we usually see on TV. Instead, it was a large, brick-walled room in which two medical examiners (or not?) put Bellamy's body into a drawer. We then get a look at Bellamy's toe tag, which in large letters is stamped with the word "RETURNED." Wait a second, what?

Why would it say returned?? Is that morgue-speak for something? Like his body was returned to the morgue after being somewhere else? Or do they already know he's going to come back and become one of the returned? This is one mystery I'm very interested in seeing unfold. Maybe next week's episode will devote a little more time to this mysterious organization and what's actually going on with Bellamy, instead of the Langston family drama.