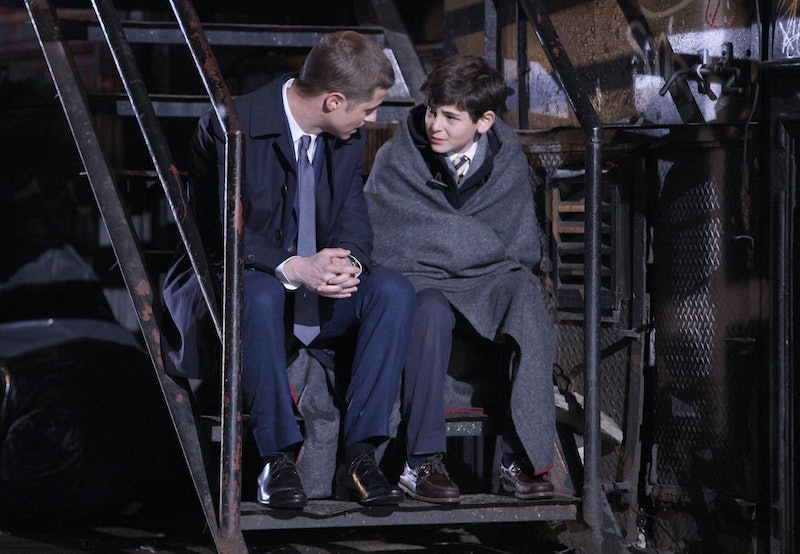 Only one episode has aired so far and yet Fox's new series Gotham is already making some interesting and clever choices with its rich comic book origins. We've got the Riddler as a forensic analyst working for the Gotham City police department, the Penguin working for a low-level crime boss as a sniveling, sickly looking young man, and Batman, Catwoman, and Poison Ivy as children living in varying degrees of social status in Gotham City. They are all only now going through the changes necessary for them to become their future iconic characters. Plus, Jim Gordon is a newbie to GCPD and a war hero who is just starting to discover the depravity and true level of corruption that needs to be cleaned up in the city. But will there ever be a time jump on Gotham that lets us see the characters as their more recognizable, grown-up selves, or will we continue to follow their long journeys to that point?

Well, very smartly, the future of the show could really go in any direction. Gotham writers can literally keep the show going on for decades until Bruce Wayne and Selina Kyle are finally adults and take on their famous alter egos, as there are quite a bit of interesting past experiences of these characters that the comics don't really delve into. But Gotham could choose to feature a time jump instead. While one large time jump from now to Batman-era would be against the very idea of the series, time jumps could absolutely be used to small effect and could in fact even strengthen the series.

A large time jump from Gotham to the city we know from the many Batman comics, TV series, and movies would really negate the whole premise of the series. We're trying to understand and learn the origins of these noble and depraved characters. If the show were to take those inside looks away from us and give us the stories we already know, audiences might get a kick out of it at first, but would probably grow tired of the familiar plotlines. Now if the show is doing poorly and Fox gives Gotham writers enough time to tie up any loose ends, the series could end on a giant time jump and show Bruce Wayne finally donning his iconic mask or Jim Gordon flashing the bat signal for the first time over Gotham City's skyline. Even if the show lasts a long time, a time jump is the perfect way to end the series on an obvious, yet satisfying note. But any time before then would be a disservice to fans.

The series could absolutely use small time jumps in between seasons, little jumps forward that could give audiences looks into different stages of the characters' lives. For example, at the moment on Gotham, Bruce Wayne is 12 years old and has just witnessed the death of his parents. Perhaps he could stay this age for the rest of Gotham Season 1. But when Season 2 rolls around, maybe he's 18? It could be interesting to see how his parents' death has affected him in stages.

Same with the Penguin. In the pilot episode, Oswald Cobblepot was ousted from his position as lackey to Fish Mooney and was presumed to have been murdered by Jim Gordon, who in fact, actually let him go because he couldn't have that death on his conscience. We know that Oswald will eventually come back to Gotham City and proceed to take what he believes is his, but he will also learn to dapper up because in the comics he is a well-dressed man who is thought to be a gentleman of crime. He also needs to gain some weight to better physically resemble the Penguin we're used to, but we'll put that aside for a while. It could be really fun to see this current 20-something fight his way back into the city's crime circuit and become a top name alongside people like Carmine Falcone.

Long story short, the show needs time to breathe before we start looking for any jumps forward in time. These characters deserve to have their backstories told.