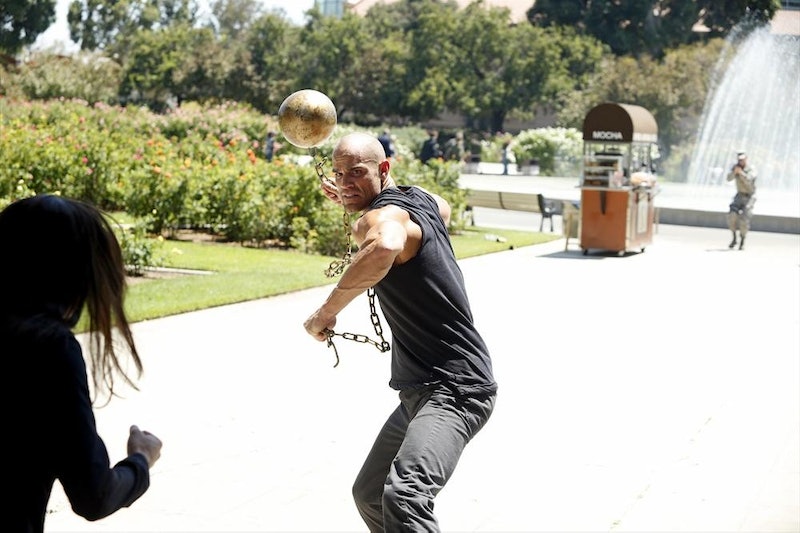 A lot of information was thrown our way at an impressive pace during the Agents of S.H.I.E.L.D. Season 2 premiere. The government now views the agents as fugitives! There's a new object to learn about! Fitz has lost his mind! Just as impressive was the introduction of a new villain, Carl "The Crusher" Creel, also known as "Absorbing Man." Whoa. We gotta settle on one name for this dude.

He has the power to absorb and become whatever material he's touching. We saw him transform into glass to make his captors think he had disappeared from his jail cell. (Did they not learn from Loki, or literally any other villain in any other movie that is put in a glass cage? Those things don't work!) In addition, we saw Creel turn himself into diamond, relax as a tree, and become a literal bump in the road that caused Hartley's team of mercenaries to crash their vehicle. He's also not dumb. He touched a tire to protect his hand before touching the obelisk. He is working for Hydra, which keeps him stocked in fun materials for him to play with. No word yet on whether or not he turns himself into cotton candy for snack time, but he does have a comic book origin!

For fans of the show who are less versed in Marvel comics, here's a little bit about Absorbing Man. He's not, as I originally thought, just a super-powered version of Arrested Development's Master of Disguise, Gene Parmesan.

One of my favorite aspects of Agents of S.H.I.E.L.D. is the way that characters and plot elements are pulled from all different comic book stories. They have woven their way into the Marvel Cinematic Universe in a way that seems genuine — at least, most of the time. In the Marvel comics universe, Carl Creel is a Thor villain who was "created" to absorb the properties of Thor's hammer. That's dangerous. He started out as a boxer and, while serving jail time, was given powers by Loki via a magic potion. We haven't seen much magic on S.H.I.E.L.D. yet, only science and alien technology. I have a feeling Creel's presence will figure into that. Loki's involvement is also interesting. We've had one casual mention of the Trickster God on the show when Sif appeared last season, but only if you remember from Thor 2 that [spoiler] Loki is ruling Asgard in Odin's place.

Absorbing Man eventually comes into contact (pun intended) with the Hulk as well as Hank Pym, the original Ant-Man. Is this our first tease of how Ant-Man will figure into the Marvel Cinematic Universe? His genetic properties were used as a drug. That would be a fun plot for the Agents to deal with.

Finally, Creel is prone to kidnapping and hostage-taking, including scientist and Thor love interest Jane Foster. While I doubt Natalie Portman would ever have time to guest star on Agents of S.H.I.E.L.D., I'm still holding out hope that Kat Dennings makes an appearance one day as Darcy Lewis. Please, 2 Broke Girls, let us borrow her!