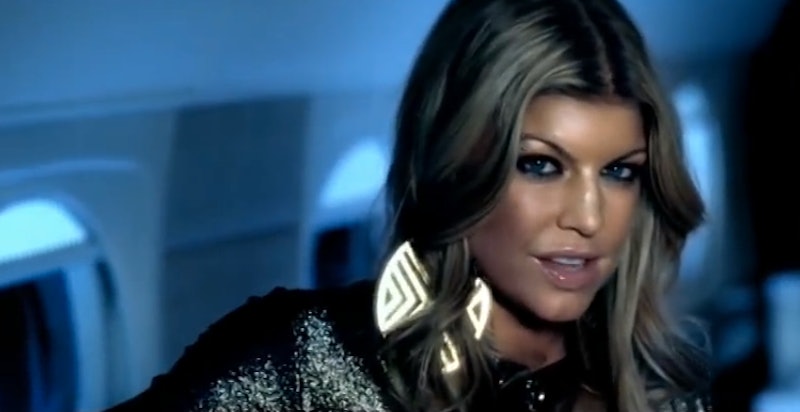 Fergie, aka Fergie-Ferg, aka Fergalicious, aka The Dutchess is BAAAAACK! Fergie is making an official comeback with her new song "L.A. Love (La La)", and it is peak Fergie. "L.A. Love (La La)" is Fergie's first single in six years, so it's fair to say this song is long overdue, as is a full-fledged Fergie comeback. Where did she go? Where has she been? Why did she ever leave? These are the questions that plague me, but all is well because it seems like she's officially back in full Ferg-mode. Naturally, there are haters and anti-Fergs who are calling "L.A. Love (La La)" just a list of random cities set to music, which it kind of is, but it's the list of random cities of our generation. The song title does make it seem like this would be the L.A. version of "Empire State of Mind", but I don't care because it's Fergie and it's mine and I want her back. I just want Fergie back.

Before she went away to have her baby and be a normal person with a family or something (details), Fergie had a good thing going as a solo star back in the 2000s, the height of the Fergie Age. Fergie was like, a really big deal. In case you've forgotten the beauty that was 00s Fergie, here's a much-needed refresher course and handy ranking of Fergie's best solo singles:

Fergie and her flare jeans show up late to her band's rehearsal in an abandoned building. Here hot boyfriend makes some kind of shady transaction in front of her house, so she rips out her Bluetooth, pulls her clothes off the hanger (they don't have a dryer?) and leaves what is clearly not a chill sitch. I think? I don't know, there are like three different Fergies in this video.

Fergie falls for a hot guy sitting front row at her fashion show that's being held inside a popup book, and this song lodges itself in your brain and never leave.

Mega points for 90s flashback Fergie who is looking GOOD and the slow-mo champagne pour moment. Who are the two girls in the limo with Fergie Ferg? The seem cool.

The limo girls came back! Love the candy factory theme coincided with the release of the Charlie and the Chocolate Factory (released in 2005, "Fergalicious" came out in 2006). Very topical and on-trend. Super points for keeping up with the cultural zeitgeist.

Everything about this video is just too good. This song was the jam in 2006, it is still the jam now, and it will always be the jam.