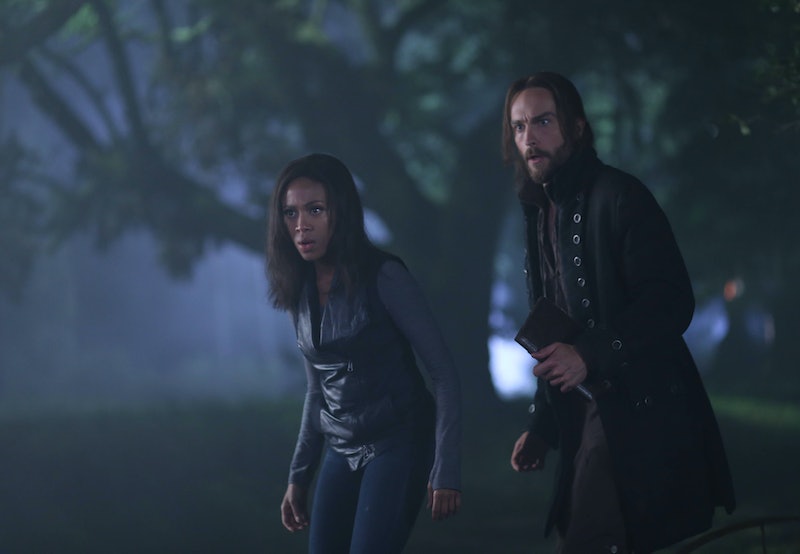 A ridiculous amount of plot went down on Sleepy Hollow 's Season 2 episode "The Kindred." So much so, that it's almost impossible to really comprehend and react to every event accordingly, even for a seasoned Sleepy Hollow fan. Monsters created by Benjamin Franklin! More Ichabod/Abbie moments! Ichabod discovering more modern inventions! Pretty much every moment was either important to the storyline or was just too entertaining to ignore, especially when Ichabod learned about two major modern businesses: credit cards and the wedding industry. Even Ichabod understands the horror of debt people!

The episode began with Ichabod and Abbie trying to figure out a way to defeat the Headless Horseman and save Ichabod's long-lost-then-returned-then-kidnapped wife Katrina. And who do the pair decide will be the person who can help them in this quest? Benjamin Franklin aka the naked guy from Sleepy Hollow's Season 2 premiere "This Is War." Now before things get anymore confusing, I've put all of the biggest moments from Monday night's episode into bullet point in order to properly and fully process and digest. And before you say anything yes, there is an Ichabod and Abbie moment. And yes, it is awesome. They're totally going to get together this season, right?

What The Hell is a Kindred?

Ichabod convinces Abbie and Jenny to let him track down Benjamin Franklin's invention from the past called The Kindred. It's a total monster that is supposedly the only creature that can truly defeat the Headless Horseman. But in order for it to defeat evil, it needs to be created with a piece of the very same evil.

So Ichabod and Abby decide to go visit Irving in prison to get the Headless Horseman's head. Irving put it in a safety deposit box, go figure.

Ichabod and Abbie create and awaken the Kindred who promptly starts fighting with the Horseman while Ichabod tries to save Katrina. Then it runs off into the distance. Not great news for our favorite team.

The New Sheriff Is Not a Jenny Fan

Meanwhile Jenny meets the new Sheriff Reyes who finds the escaped mental patient (as others treat her) with a wide array of guns in the police archives. Not smart Jenny. Jenny gets arrested and takes one for the team rather than try to get out of it with Abbie's help. She stays in prison for the rest of the episode.

Katrina convinces Abraham aka the Horseman aka her previous beau to let her accept his proposal to be with him rather than force her hand. He agrees, thinking she will accept his love soon enough. People believe all kinds obvious and crazy lies when they're in love, amirite?

Katrina decides to stay behind and act as a mole for the team. But can we really trust her? Does she actually still love Abraham? Who knows with her? And that makes her all the more dangerous.

Finally Henry returns to the scene by appearing as Irving's lawyer when Irving transfers to the psych ward, and has him sign a contract in blood without him even knowing it.

Could things get any worse for the team? I feel like it's impossible, but I'm sure the Sleepy Hollow writers can figure something out. Damn you Sleepy Hollow, even in your most bleak moments, you are still so intriguing!