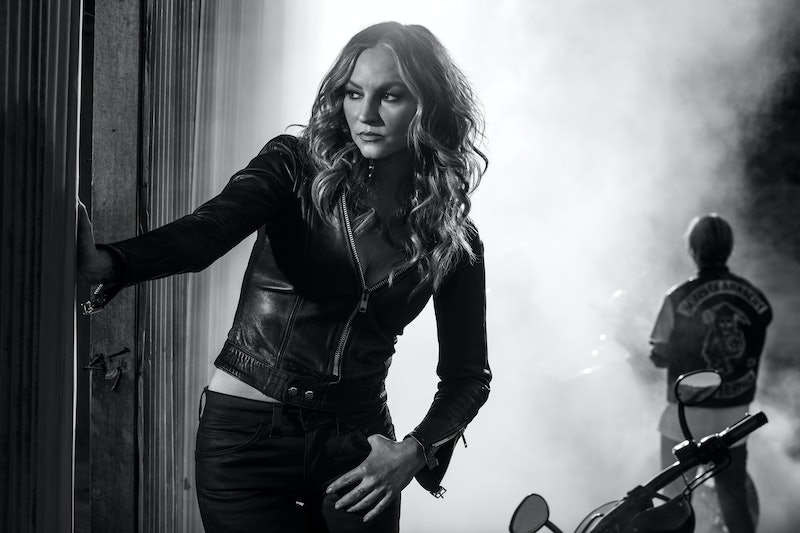 There's one main question that’s been on the forefront of everyone’s mind since Sons of Anarchy ’s Season 7 premiere, and that's simply: who the hell is going to make it out of this series alive? The dead bodies have already started to pile up this season as Jax continues to seek retribution for Tara’s death, and it’s only a matter of time before the grim reaper sets his sights on SAMCRO itself, putting everyone associated with the club at risk. But I have a feeling Wendy will make it out of the SOA finale. Some believe Jax will die by the finale, while others call into question Juice and Gemma’s fates. But I highly doubt the death toll is going to end there. (This is a Kurt Sutter show, after all.) No, I bet Season 7 will culminate in an epic bloodbath that’s sure to put all other seasons to shame — and leave those watching in need of some serious therapy.

Wendy is the one person, however, who I think still has a chance of getting out of Charming relatively unscathed (physically, at least). I know, I know… how can I possibly think that Jax's ex-wife and ex-junkie, who’s fallen off the wagon more than a few times, could ever come out as the only victor in this twisted little tale? Believe me, I know how it sounds. She’s not exactly the poster child of success. But before you vote on whether I should have a meeting with Mr. Mayhem, let me explain the method to my madness.

She’s Currently the Most Stable Character on the Show

Like it or not, Wendy is hands down the least crazy person left on SOA. As much as we want Jax to still be that loving father who was willing to sacrifice his freedom to ensure his children’s future at the end of Season 6, Tara’s death has left him completely unraveled and in a perpetually violent state. There’s just no way he can come back from this in one piece. As for Gemma, she’s becoming more and more unhinged as the guilt of killing Tara weighs all the more heavily on her mind. Not exactly the greatest people to be listed as Abel and Thomas’ main caretakers, right? Even Nero, who I’ve always considered to be the voice of reason on this show, is finding himself tumbling back down a darker path. Which leaves us with Wendy.

In just two years of being clean, she managed to completely turn her life around, even getting a stable job that revolved around helping other drug addicts. And while her temporary relapse certainly doesn’t make her Mother of the Year, let’s remember that it only happened because she got dragged back into all the club drama. (Not to mention the fact that Jax forced drugs into her system at one point.) All she's ever wanted to do since she got back was to get to know her son. But instead, she found herself smack dab in the middle of a war between Tara and Gemma.

It’d be enough to drive anyone off the deep end, especially someone with a penchant for mainlining narcotics. That’s not to say she deserves a free pass or anything — far from it. (Doing drugs while you're pregnant is straight up unforgivable.) But when you look at the type of company she’s keeping these days, where murder and bloodshed are doled out with a simple wave of a gavel, she is by far the lesser evil here. Tara knew it, which is why she wanted Wendy to get sole custody of the kids if something were to happen to her. Perhaps Sutter intends to inevitably make that plan a reality.

She’s the Only One Credited for All 13 Episodes

If you go to Drea de Matteo’s IMBD page, you’ll notice that she’s credited for all 13 episodes of the seventh season, while all the other SOA characters are listed in either the most recent or upcoming few episodes. None of them are credited so extensively. Now, it’s hard to know what exactly to take away from this. For all we know, IMBD screwed up and just hasn’t gotten around to updating each actor’s page. Or this could be a very, very subtle hint to suggest that Wendy will be the only survivor of this roller coaster ride. But obviously, this is all pure speculation. I’m simply pointing out that this could be an indicator of Sutter’s plan all along: to make sure that Wendy and the kids get out safe, no matter if/when death comes knocking on everyone else's door.

She Was Brought Back for a Reason

Then there’s the fact that Matteo was brought back as a series regular in the first place. Nothing Sutter ever does is without meaning, so what would be the point in upping her role on the show now, only to have her character killed off? I’d say he’s got big plans for Wendy this season, which involves getting those kids the hell out of Charming once and for all. That way, no matter what happens, fans will have the comfort of knowing that history won’t once again repeat itself. Not to mention that there's something almost poetic about the possibility of having the only survivor be the one you thought for sure would be a goner long ago.