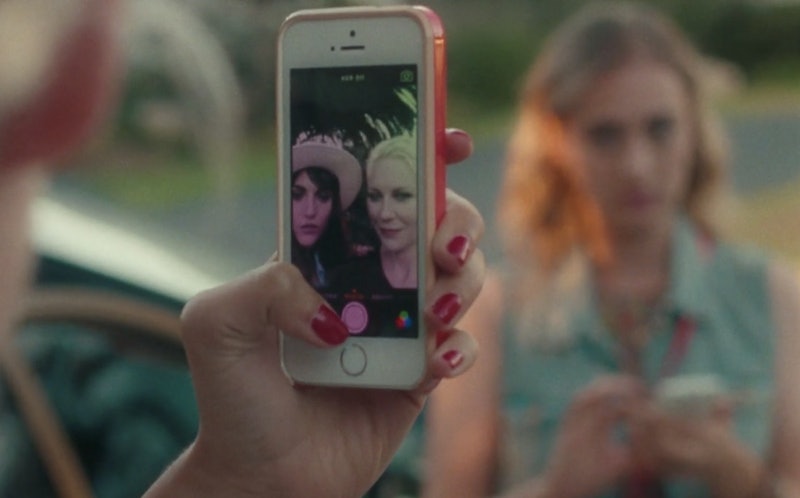 Vs. Magazine 's short film "Aspirational" starring Kirsten Dunst is a poignant if not chilling take on our social media and celebrity culture obsessed generation. A film by Matthew Frost, produced by Iconoclast pictures, "Aspirational" really couldn't have starred anyone but Kirsten Dunst — she's this generation's iconoclast, turning up where it's definitely cool to turn up but only so she can tell you exactly how uncool it is to be there.

In this case, she's appearing in an indie, seemingly low budget short film for the infinitely stylish Vs. Magazine to call out the generation she belongs to for being a pack of mindless douchebags. It's completely meta and completely on brand for Kirsten, who once again makes us want to hang out with her while drinking straight liquor and listening to her bitch about everything that deserves to be bitched about. That's right – somewhere along the line, Kirsten Dunst got hard, and terrifying too, but in a really compelling way.

But enough about Kirsten — the video features the actress playing herself, waiting by the side of the road for an Uber, when she's accosted by two disgusting examples of LA girls and, on a more general level, humanity. The "fans" fawn over Kirsten but treat her like a prop, taking selfie after selfie with her to post to Instagram in order to achieve online popularity. The reality of the scenario is completely depressing — that "achievement" can and is now often weighed on how many "likes" one gets via social media, and that we've devolved to the point where a third party's personhood can be completely negated by a first party's selfishness and ego. The really awful moment for me is when Kirsten asks the girls if they want to talk but they're too busy with their phones. It gave me goosebumps.

The video is beautifully shot, Kirsten's braid is hair perfection, and the social commentary is on point. So watch below, and prepare to be charmed by Kirsten Dunst but absolutely disgusted by everyone you've ever known.

More like this
Tom Holland Explained His Social Media Break & Shared Mental Health Resources
By Grace Wehniainen
Gemma Collins' Net Worth Is Only Going Up
By Catharina Cheung
The “Teenage Dirtbag” Trend Is TikTok's Latest Nostalgic Obsession
By Meguire Hennes
In Rap Sh!t, Social Media Has Main Character Energy
By Aramide Tinubu
Get Even More From Bustle — Sign Up For The Newsletter