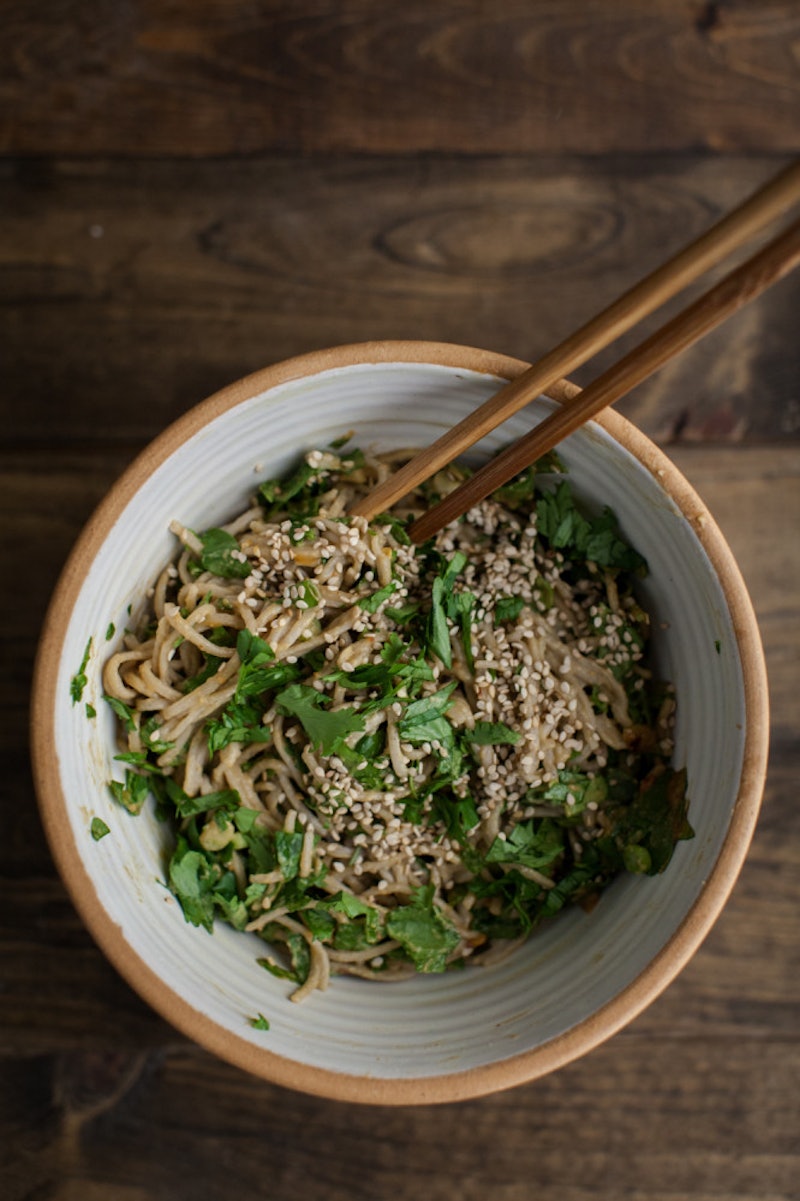 I was just five years old when I decided to become a vegetarian. It happened at a restaurant when I was eating my favorite food, pepperoni pizza, and overheard a conversation about what meat was made out of. "Is it a pig?" a woman asked. "Or a cow?"

It was the first time I had ever comprehended that what I was eating had once been alive. Not alive like a piece of lettuce, but alive like me. Alive in a way that represented a family, a home, a personality, and most importantly — suffering. Even though I was only five, I knew partaking in an activity that would cause pain and premature death was nothing I wanted to contribute to. And at 24 years old, I still consider it the easiest, best, and most logical decision I've ever made.

But being a vegetarian comes with a certain stigma. Like any decision that puts you in a minority, opposition is expected. That being said, I do think adapting a vegetarian diet has a hell of a lot of benefits, outside of the classic "animals deserve to live" argument.

But I'll let you be the judge: This World Vegetarian Day, here are 13 reasons to consider going vegetarian that aren't completely ridiculous and are actually pretty damn convincing.

According to several studies, eating a plant-based diet and foods that have soy will boost your sex drive because of the "sex hormone" phytoestrogen, which is found in plants. Not to mention the cholesterol found in meat can clog arteries and slow blood flow to those vital organs needed in the bedroom. (Oh, and for the record, I think we vegetarians do taste better.)

A few months ago, TIME published an article titled, "7 Ways Vegetarians Live Longer." While it presented many eye-opening facts, it all boils down to this: A recent study showed vegetarians have a 12 percent lower mortality rate compared to those who ate meat.

You'll Be in a Better Mood

A 2012 study had participants randomly assigned three diets: Meat, fish, and vegetarian. Those who ate a vegetarian diet were surveyed as significantly happier than those who ate meat and fish.

Everyone knows that vegetarians have lower blood pressure, but did you know that some doctors actually prescribe a vegetarian diet for those who are at risk? Vegetarians are also 32 percent less likely to develop ischemic heart disease.

According to numerous studies, vegetarians tend to weigh less than their meat-eating counterparts (and no, not because they're malnourished). Eating a vegetarian diet can lower your BMI and help you maintain a healthy body weight.

It was good enough for Einstein

Albert Einstein? Yep, he was a veggie. He even predicted the future fate of our world, saying: "Nothing will benefit human health and increase the chances for survival of life on earth as much as the evolution to a vegetarian diet."

A Loma Linda University study found that a vegetarian diet may have protective benefits against cancer. Vegans had the lowest risk for cancers, specifically cancers most common among women, like breast cancer.

You'll Save More than 200 Lives a Year

On average, a vegetarian saves about 202 animals from the slaughterhouse every year. Some sources report a higher number, closer to 400 animals a year. Regardless — that's worth the spared hamburger in my book.

Think about it: What are the most expensive things on the menu? Meat! Leather items are also super expensive and will always cost you more than the non-leather alternative.

You won't Have to Worry About Eating Feces

You would assume that a piece of flesh found with feces or insects in it would be dismissed as non-edible by the USDA, right? Wrong. Any piece of meat can have a certain amount of feces and still pass inspection. Eat up!

Another tidbit: Scientists at Johns Hopkins tested chicken flesh and found 96 percent — yes, 96 percent — of Tyson chicken was contaminated with campylobacter, a bacteria that causes more than 2.4 million cases of food poisoning a year.

Raising animals for meat takes up a whole lot of resources. It takes 13 pounds of grain to produce just one pound of animal flesh. I'd take 13 pounds of rice for the hungry over one pound of meat any day. Arguably, the more people who go vegan, the better able we’ll be to feed the hungry.

You'll Help Save the Planet

Animal agriculture is one of the top causes of greenhouse gas emissions. More so, factory farming equates to 37 percent of methane emissions, which has more than 20 times the global warming potential of CO2.

You Won't be Eating Animals That Are Smarter Than Your Dog

Dogs are the best. I love my dog more than anything, but the fact of the matter is, my dog is dumber than a piece of bacon. Pigs are wildly intelligent creatures, and if we're being logical about it, there's no reason we should categorize pigs as food and dogs as friends.

Also, chickens and cows are more intelligent than we give them credit for. Did you know cows have best friends? And that pigs can learn to play video games? Basically, we all owe Babe a huge apology.