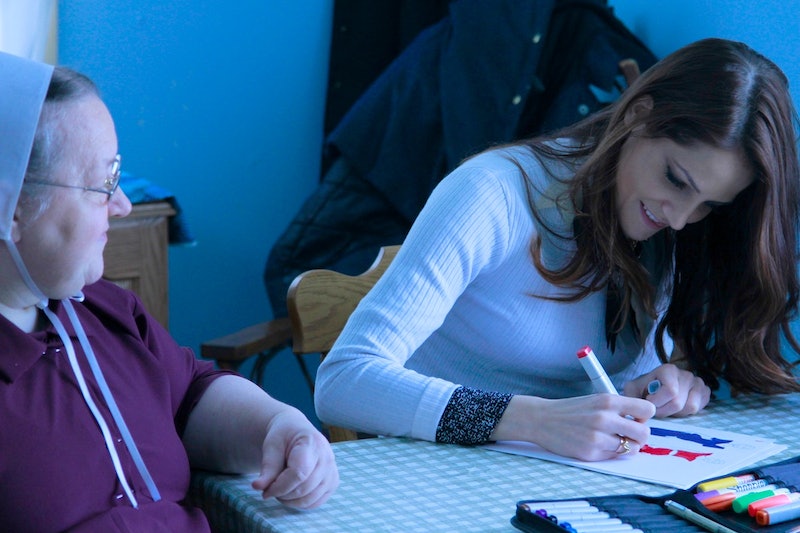 There's no question that reality TV certainly destroys many people's lives. However, in the case of Kate Stoltz, star of Breaking Amish Season 1 and its subsequent spin-offs Breaking Amish: Brave New World and this past summer's Return to Amish, reality TV has made her life so much better. The current batch of Breaking Amish cast members on Season 3 sure could learn a lot by following Kate's lead in successfully transitioning from the Amish to the English world.

The last time we checked in with Kate, she was really making her dreams come true as a model living in New York. In the process, she snagged a (minor) magazine cover, did a swimsuit photo shoot, and maybe even contemplated having plastic surgery. But that was all just before the Return to Amish reunion aired on July 20. As we also know from watching reality TV, a lot can happen in two months.

Kate's modeling career is still going strong, even without the help of the Illuminati. She's even been branching out into other fields and made some pretty radical changes in her life. Oh dear. We're not in Amish Country anymore. Here's what Kate's been up to in her post-Return to Amish life.

She shaved her head

I told you Kate had changed a lot since we last saw her. However, Kate's new 'do isn't as drastic as it may seem. Yes, she did shave her head but only on one side of it, you know, the look that's popular with the ladies these days. "Yes, I shaved my head a couple weeks ago. I needed a change," Kate tweeted on Sept. 18. But Kate hasn't abandoned her conservative upbringing completely just yet. She was quick to note on Instagram that she can still wear her hair in her usual way with just a flip.

During the last season of Return to Amish, we saw Kate model in her very first New York Fashion Week show for CZAR by Cesar Galindo, even if Mary and Katie-Ann stole the show in their Amish garb. Well Kate certainly showed them during New York Fashion Week in September 2014, modeling for Fashion 4 Development, A.Z. Araujo, and Victor de Souza, whose fashion show featuring the models riding in horse-drawn carriages in Central Park drew a crowd of animal rights activists protesting it. Kate appeared on Good Day New York the next morning to say the controversy surprised her, because using horses for work and transportation is such a huge part of Amish life. I guess you can take the girl out of the Amish, but you can't take the Amish out of the girl.

She did a commercial for Coach

Kate is obviously no stranger to the camera, and her modeling is already off to an impressive start after about two years in the game. What's the logical next step? A national commercial, obviously. In September, Kate shot a commercial for the accessories brand Coach, which also starred Swedish model Isabella Oberg. It doesn't look like the spot has been released yet, but it brings a tear to the eye just seeing our little Kate all grown up.

She started a clothing line

Last season of Return to Amish, Kate expressed her dream of one day starting her own clothing line, and she even met with a real-live fashion designer on the show. Well, it looks like all of Kate's dreams are actually coming true, because she sells her very own clothing line on Etsy, which includes party dresses, scarves, and even Amish quilts. And they don't come cheap either. She also made that dress that she wore to the Return to Amish reunion. Maybe if Mary partnered with Kate instead of Jeremiah, her business selling Amish wares would have been more successful.

The paparazzi are following her

More like this
'Bachelorette' Vet Clare Crawley Unveiled 2 Special Wedding Day Accessories
By Stephanie Topacio Long
Tahzjuan Took A Cruise With These Bachelor Nation Alums After Visiting Zach's Season
By Kayla Blanton and Grace Wehniainen
This 'Bachelor' Contestant Had The Best Reaction To Wearing The Same Dress As Another Woman
By Grace Wehniainen
Every Single Thing In Maya Jama’s 'Love Island' Wardrobe
By Darshita Goyal and Sophie McEvoy
Get Even More From Bustle — Sign Up For The Newsletter
From hair trends to relationship advice, our daily newsletter has everything you need to sound like a person who’s on TikTok, even if you aren’t.