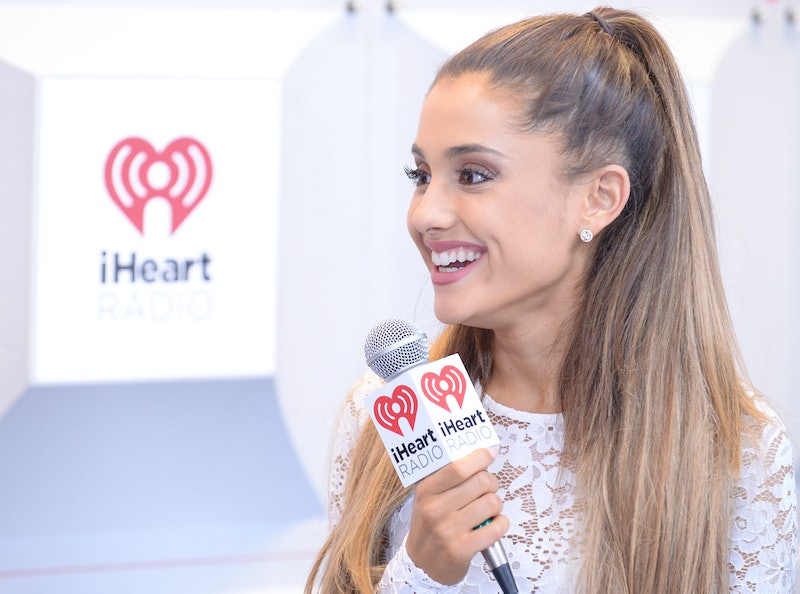 Ariana Grande went from the indisputable sweetheart of the summer to a pop diva overnight. Every day there is a new story about something Ariana Grande has said or done, and it is hard to know what to believe. Every story today gives "credibility" for something even more outrageous to be reported in the news tomorrow. When will it all end?! Grande is an extremely talented singer and the focus has shifted from her artistic ability to her personal life. I have to admit that I am an avid Arianator who cannot help wanting to know more about her, but these diva demands are not what I wanted to hear about! Sadly, Ariana Grande and I are not BFFs (yet), so I cannot irrefutably deny any of these claims. Nevertheless, I have seen some noticeable changes in her behavior that may negate many of the accusations against her. In an interview with Us Weekly, Ariana Grande spoke about Mariah Carey openly which is quite the change from her supposed no questions about Mariah Carey rule.

I am hoping that the recent stories about her are some steps in the right direction and that Ariana Grande can take her rightful place as a pop princess among this new generation of musical artists. Let's try to put some of these awful rumors to rest and focus on the positive moves Ari has been making to combat the insanity.

I have to admit that the first time I heard the song "The Way," I thought to myself, "Why is Mariah Carey doing a duet with Mac Miller?" And I wasn't the only one. The Mariah Carey comparisons (both negative and positive) have been endless. So much so that, according to one of the rumors, Mariah Carey comparisons were banned as topic Grande could be asked about in interviews. Well, apparently, that is not true — at least not at this moment. The singer recently welcomed the comparisons telling Us Weekly, "Mariah has been a huge influence on me since I was a little girl. I've even done a cover of one of her songs. I don't think there are any negatives to being compared to one of the greatest vocalists of all time. It's honestly a great honor."

She is Only Photographed from her Left side

Yes, there are a lot of photos from that angle, but there are also plenty of photos of her that were taken from her right side and even from straight on. See that up there? Right side of her face!

She Wants all of her Fans to Die

Considering that her fans are the basis for her having a career, I find this hard to believe. She was quoted saying, "I hope they all f—king die," in an elevator after a personal appearance. Anyone who follows Grande on social media can see that this rumor seems far from true. She follows many of her individual fans in addition to dedicated fan accounts. Grande responds to many fan tweets individually, initiates fan live chats through Twitter, and often tweets out statements of gratitude. She just inked her first endorsement deal ever with wat-AAH!, a water brand targeted toward her youthful fanbase. Grande even said, "My fans are my everything, and because of this, I could only endorse something I believe in. Also, I love drinking water and I want to inspire my fans to do the same."

Grande's prices for meet and greets are sky high which has caused an uproar given all of the other negative rumors about her attitude toward her fans, but she demonstrated that she loves performing and bringing joy to her fans when she had a surprise free concert at a club over the weekend.

Ariana Grande is rising up the ladder in the pop music world. Since you cannot rationally hate on her flawless performances, the focus has obviously shifted to her personal life. She is only 21 and even if some of the rumors are true, she is still growing up and learning. Hopefully if we give her a chance she will prove herself worthy of being the pop princess that her fans categorize her as.

More like this
What Is Ariana Grande's Net Worth? When It Comes To Money, She Has No “Problem”
By Hugh McIntyre
Will Beyoncé Be At The BET Awards To Perform “Break My Soul” Or Attend The Show?
By Jake Viswanath
Twitter Has *A Lot* To Say About Justin Timberlake’s Beat Ya Feet Dance
By Sam Ramsden
'The Summer I Turned Pretty' Using “Cruel Summer” Has Twitter Begging Taylor Swift To Release A Music Video
By Radhika Menon
Get Even More From Bustle — Sign Up For The Newsletter