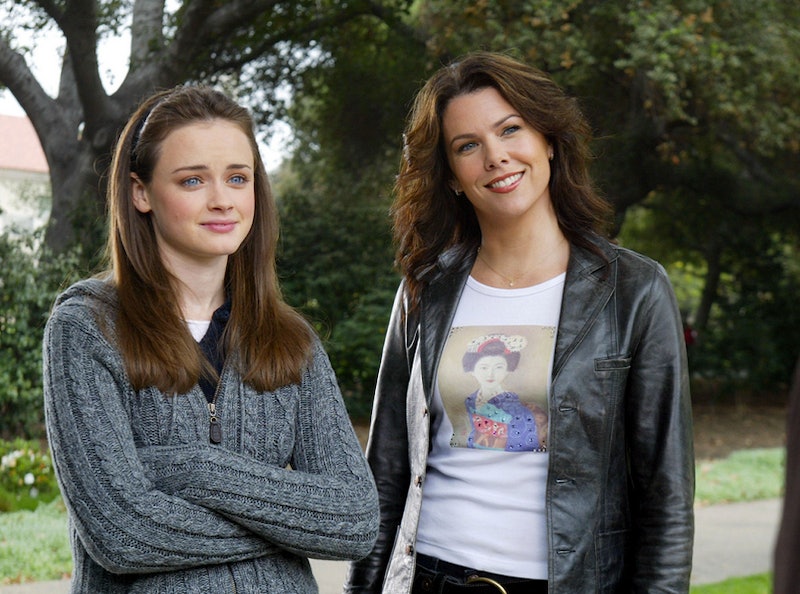 Some things are just totally untouchable in the world of television and one of those things is the Gilmore Girls theme song, "Where You Lead," by Carole King. I mean, this theme song is up there with those of Friends and The O.C. when it comes to capturing the essence of the series it belongs to in the fullest sense. Thankfully, Netflix seems to agree — probably because they know that changing this series' theme song would unleash the wrath of God. Or at least the wrath of coffee-loving Lorelai Gilmore fans all over the world. Gilmore Girls is now available on Netflix, finally, and, yes, the original theme song is there in all of its glory. Thank the TV gods.

Of course we worried that Netflix would take creative liberties with this particular aspect of Gilmore Girls' legacy. I mean, the site changed the Dawson's Creek iconic theme which is basically blasphemy — what's Dawson's Creek without Paula Cole's "I Don't Wanna Wait?" People are obviously still watching the series on Netflix Instant, but the lack of its scene-setting, iconic theme song makes the experience just a little less than what it should be.

So, naturally, you can understand my concern that Gilmore Girls might be a little less Stars Hollow-y without Carole King singing about following where you lead. I would have watched the series on Netflix anyway — after writing an angry letter to the company, of course — but the song is important. How could anyone ever replace this song?

Yes, Carole King and Netflix, I do need you to be with me while I lead you through the emotional experience of re-watching Gilmore Girls for the first time since it went off the air in 2007. It's been seven long years since then and the familiarity of King singing, "I will follow-oh-oh-OHHH," is exactly what I need right now.

So, thank you, Netflix. For totally not screwing this up like you've screwed up every year that you haven't made Gilmore Girls available on Instant. And for saving me the time I would've put into a complaint letter so I can spend it watching Rory and Jess' first kiss over and over again.

More like this
Christina Aguilera Had A Mini "Lady Marmalade" Reunion With Mya At LA Pride
By Jake Viswanath
Emma Thompson, Lashana Lynch, & Stephen Graham Lead Netflix’s 'Matilda'
By Sophie McEvoy
Why You Loved 'One Tree Hill' So Much — And Still Do
By Sabienna Bowman and Radhika Menon
Neil Patrick Harris Will Play 'Doctor Who's “Greatest Enemy” Yet
By El Hunt
Get Even More From Bustle — Sign Up For The Newsletter