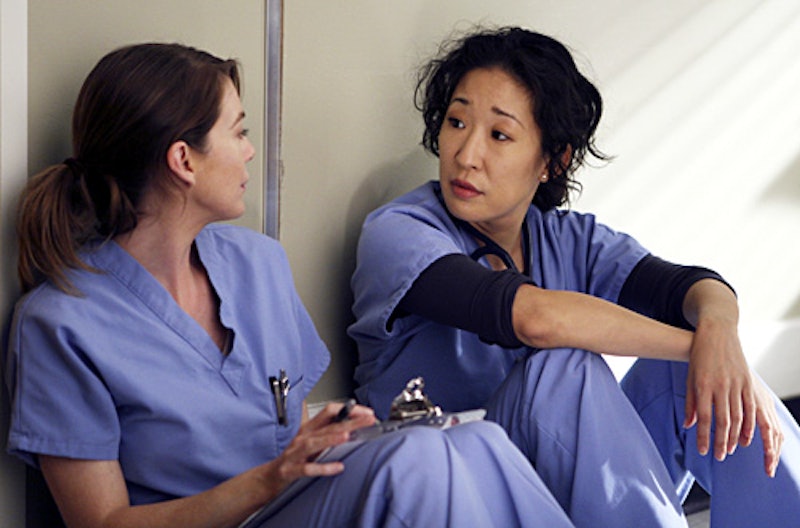 Since the day Sandra Oh announced she'd be leaving Grey's Anatomy I've been mourning the loss of Cristina Yang. Not just because she's a kick ass female character (and TV can use as many of those as they can get) but also because I couldn't imagine my favorite show without the duo affectionately nicknamed the Twisted Sisters. Who is Meredith without her Cristina? How will she possibly carry on without her person?

As it turns out, she's doing OK, even though she's got a lot on her plate. Soon, she'll be dealing with the big reveal that the new head of cardio is actually her sister, and her relationship with McDreamy is on the rocks. Oh, yeah, and she's raising two children. But she has to do it without Cristina, and I hate it... possibly more than Meredith herself does.

Besides, there was so much going on otherwise that it was hard to remember that we were missing a major character, but that totally could have been the point of how hectic the premiere was. Between Meredith's bickering with Maggie, Derek's random appearance at the end, and Callie and Arizona trying to figure out whether or not they were ready to welcome another baby into their lives, it felt like a very rushed, very full hour of television... and had there been a Cristina story interwoven in there, it would've been even more jam packed. But being that we've only seen one episode without her, it's totally possible there's a gap that'll become obvious later on in the season.

What I did miss? There was no Cristina rushing around barking orders at interns, no late night knocks on the door before she snuggled into bed with her BFF and her BFF's husband. Cristina was such a source of support in Meredith's life, and helped remind her that although her husband might have been personally selected by the president to run a project of his very own in DC, she's talented, too. She deserves the same acclaim, and I think it's in part due to Cristina's encouragement that we might just see her go for it this season.

Without Cristina, there's a lot less sass — but there's plenty of room for Meredith to let her relationship with Derek grow. Maybe it's time for Derek to finally become Meredith's person... even if she isn't his biggest fan right now. If not, it might also be a great chance to see Meredith take on other female friendships and find a new BFF, although no one can ever replace the great and wonderful Cristina Yang.

More like this
6 Mind-Blowing Fan Theories About How Stranger Things Will End
By Kadin Burnett
Jurnee Smollett’s Heart Is Healing
By Rebecca Carroll
Why Sadie Sink Is Hopeful Max Will Return In Stranger Things Season 5
By Brad Witter
What Working At Marvel Is Really Like, According To A 'Ms. Marvel' Co-Creator
By Gretchen Smail
Get Even More From Bustle — Sign Up For The Newsletter