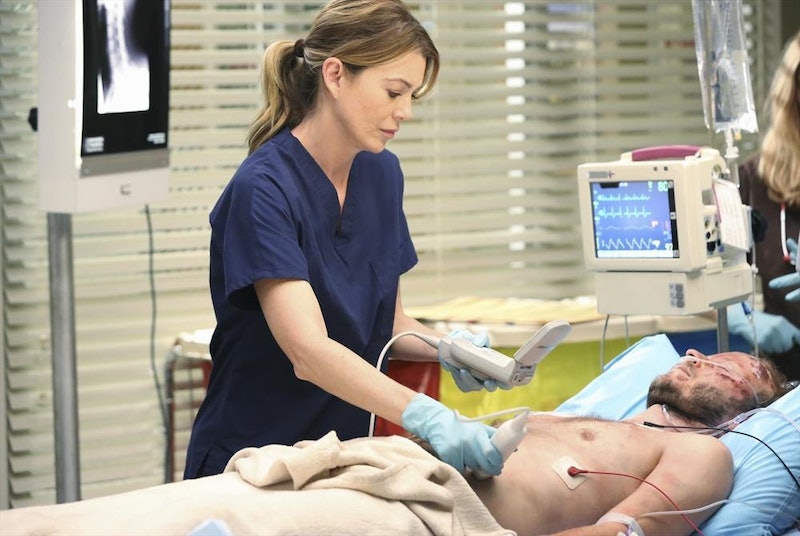 What happens when you get a bunch of incredibly attractive science dorks together in the middle of the rainiest city in America? 11 seasons and counting of some Shonda Rhimes' broody brilliance called Grey's Anatomy. To the super fans out there who've just re-watched the tenth season in preparation for the next, I offer you a metaphorical Kleenex. After the heartbreak of Season 10, we're all asking a lot of questions about what to expect when Grey's Anatomy returns for Season 11 on Sept. 25. This season will probably be the most heartbreaking for our dark and twisty Meredith Grey and all of her followers. Why? Because Cristina Yang is in Zurich. HER PERSON! Somewhere between my tears last season, I completely lost it, shouting, "Why, Cristina, why?"

Well, Rhimes did tell TVLine that it will be a "Meredith-centric season," complete with a time jump. Grey's Anatomy is Meredith's world, after all. So while we don't really need to talk about how her ex-fiance just gave her a hospital in one the most medically efficient countries in the world, we should discuss how Yang's absence will affect our beloved Meredith. Because when your husband is called by the president to work for him on the other side of the country and you've got two children and the most drama-prone hospital in the history of man to worry about, I'd imagine you're going to want to create a back up "person" to help you deal. But Meredith's grown up with Ellis Grey as her mother, she can survive. She can do it on her own... Right?

Touche. While Yang's character is one of the toughest to lose, we know Grey Sloan Memorial isn't ready to give up their ABC time slot. So, who do we have on the bench who can step up to the plate in Meredith's time of need? Let's go through the roster.

The Good: Karev's great with kids. Zola and Baby Bailey would be in great hands. That is ultimately what Meredith needs, right? Someone she can trust to be around her kids. And any Grey's fan knows that Karev started off a lot worse than who he's become.

The Bad: Karev also acts like a child. Sometimes he doesn't really communicates his emotions well and just says, "I don't give a crap" about very significant situations. Most of the time he pushes people away when he's experiencing any time of shift in emotional comfort, i.e. Izzie's disappearance, finding his father, that whole deal with Rebecca Pope... But is that such a change of Mere's previous person? I mean, couldn't it be argued that Yang was just as disconnected from her emotions?

The Ugly: Let's say, I don't know, Meredith cheats on McDreamy, or McDreamy cheats on her. This is information Mere would have to bring up with her person, right? Well if Karev were her new Yang, how do you think he would handle this kind of situation? Probably not through dancing it out. It would take Meredith to hit some serious rock bottom for Karev to say anything other than "shut up" anytime Meredith brought up the situation. I'm talking crying over her own ER-admitted child type of rock bottom and we just don't want that. It's not that Karev doesn't care, it's just that tequila and man-hating/relationship-mending isn't really his forte.

The Good: If forced, I'm sure Kepner could stop talking and just dance it out. It would probably be awkward, but it could work. Kepner is in need of a lady friend to bond with just as much as Meredith. And while Callie and Arizona figure out their latest drama, isn't that what Meredith needs?

The Bad: Kepner is annoying. The dichotomy between Meredith's dark and twisty and Kepner's bright and straight and narrow is more than apparent. Maybe her marriage to Avery will make her a little less high-strung, but imagine McDreamy, Meredith, and Kepner in a bed together. Are you as uncomfortable as I am? I rest my case.

The Ugly: Hypothetical time, what if Meredith really needs to talk to someone about her new half sister and how it "just like [her] mother" to have another sibling she doesn't know about? Say Shepard is off saving all the brains in D.C., leaving Kepner as the only option. What's Kepner going to do when Meredith decides to go crazy on the new sister? Hesitantly offer up peaceful alternatives to roundhouse kicks? Make a flow chart about it? Yeah, Kepner, we need you to step it up.

The Good: Owen Hunt is equal parts level-headed and passionate. He's also pretty sturdy. A military guy, he knows how to approach and fix a problem. Boom. Meredith has ALL the problems. Maybe this will work out after all.

The Bad: HE REEKS OF YANG'S MEMORY. Every time we see the red-headed version of McDreamy that is Owen Hunt we think of fights about kids and steam rooms. Moreover, I really don't think Hunt's a tequila guy.

The Ugly: Say we've got a situation where Meredith is crying about how hard it is to be a surgeon and a mother who doesn't want to be like her mother. She needs a friend, a drink, and good ol'fashioned nostalgic talk about life sans the sap and mushiness. Guess who can't help her: Owen Hunt. Why? Because Owen Hunt doesn't exactly sympathize with problems like that. He'll listen, yes. But he's also living with PTSD and probably won't want to have that kind of talk with Meredith. Let's face it, of all the ways we can platonically 'ship the ladies and gents of Grey Sloan Memorial, Hunt and Meredith are the most non-friends.

So, here's hoping Season 11 brings Meredith Grey a new person, the hospital doesn't implode without Yang, Meredith and Derek don't get a divorce, and Dr. Webber doesn't start drinking again, and Hunt doesn't lose his shit over Yang being gone. Who am I kidding? This season is going to be disastrously emotional for all of us.