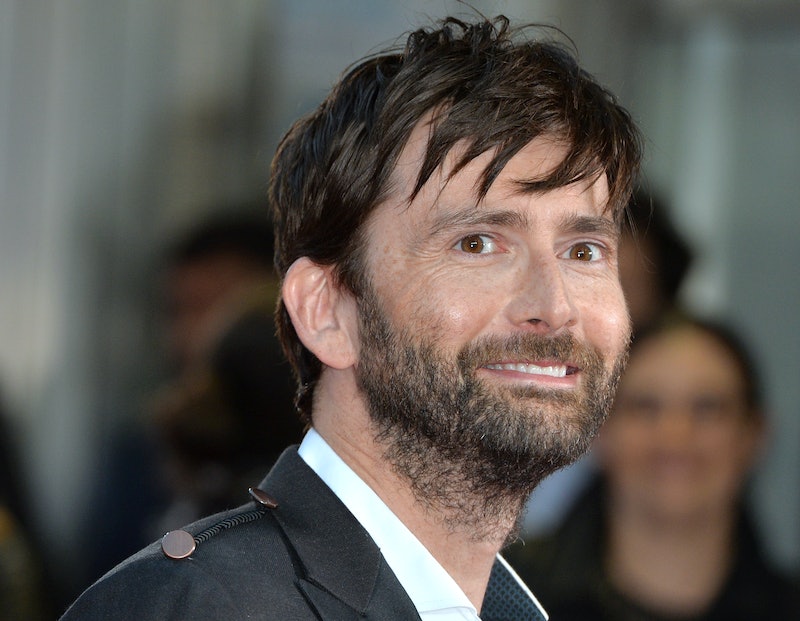 Gracepoint? Broadchurch? Gracechurch? Broadpoint? Are these shows the same, or what? You’re forgiven if you think it’s confusing, you're not alone — both show names sound stiff and proper to me, so it’s hard to keep them straight. Here’s the lowdown: Gracepoint is the mystery series premiering October 2 on Fox. Gracepoint is also a remake of Broadchurch , which aired on BBC America back in 2013. It’s extra-hard to keep them separate because both Gracepoint and Broadchurch star David Tennant, though his British co-star, Hot Fuzz’s Olivia Coleman, was replaced by Breaking Bad’s Anna Gunn. But when he's not recreating past roles, what else is Tennant up to?

If you’re not a Doctor Who fan, Tennant is one of those “that guy” actors. The Scotsman has a ton of credits to his name, but he hasn’t really broken through to American audiences yet (Whovians aside, of course). Some of his more Hollywood projects — like Fright Night, the Colin Farrell-starring horror comedy where Tennant plays a magician/vampire hunter — flopped. Mostly, he’s done a bunch work across the pond — where he’s an extremely popular household name — but has had varying exposure in the States. At least, until now. For those of you about to embark on the Gracepoint journey, here are a few of some essential Tennant performances to get you acquainted with the good Doctor:

The Breakthrough TV Performance: The Doctor in Doctor Who

Besides Broadchurch, Tennant has done a lot of television, with roles in acclaimed British series, mini-series, and made-for-TV movies, including United, Casanova, Hamlet, and The Politician’s Husband. But far and away, he’s best known for being the Tenth Doctor on Doctor Who. Tennant, along with showrunner Steven Moffat — who also gave us Sherlock, so we are all forever in his debt — was credited with giving the Doctor a younger, cuter vibe that brought new fans to the series. After all, his Doctor wore Converse, which I’ll take over Matt Smith and his bow tie any day.

The Obligatory Potter Persona: Barty Crouch, Jr. in Harry Potter and the Goblet of Fire

It must be written into law somewhere that every British actor of note must appear somewhere in the Harry Potter movie franchise. At least Tennant picked a good one: The first three entries in the Harry Potter series are fun and all, but Harry Potter and the Goblet of Fire is where things get serious. No more accidentally turning Hermione into a cat; a Hogwarts student actually dies (pour one out for — spoiler alert — Cedric Diggory). Tennant’s Barty Crouch, Jr. doesn’t have a huge role in the movie, but he makes it memorable with a disgusting tongue-flick tic that telegraphs how loathsome Crouch really is.

The Voiceover: Charles Darwin in The Pirates! Band of Misfits

Like TV roles, Tennant has also done a lot of voice acting — he does have a pleasing voice. You can hear him in How to Train Your Dragon and Star Wars: The Clone Wars, but his most delightful voice performance was as Charles Darwin in The Pirates! Band of Misfits. Maybe I just love it so much because it was made by Aardman Animations — the studio that does all of the Wallace and Gromit movies — so it is extremely British.

Did I say this would be the “essential” list of Tennant’s roles? I lied; this movie is totally inessential. This is the guiltiest of all guilty-pleasure rom-coms, the kind of movie you put on when you’re taking a sick day and spending it in your PJs with nothing but streaming movies. In it, Tennant plays a celebrated British author — one who’s conceited, but not even all that familiar with his own work — about to marry a hugely famous celebrity. To escape the paparazzi, they elope to a remote Scottish island, where he meets a local — played by (the infinitely charming) Kelly MacDonald — who agrees to be a decoy to mislead the press. Hijinx ensue, romance blossoms, he finds a reason to wear the silly outfit that's pictured above, and you get the warm fuzzies without having to think all too much. Basically, it’s the opposite of Gracepoint and Broadchurch.