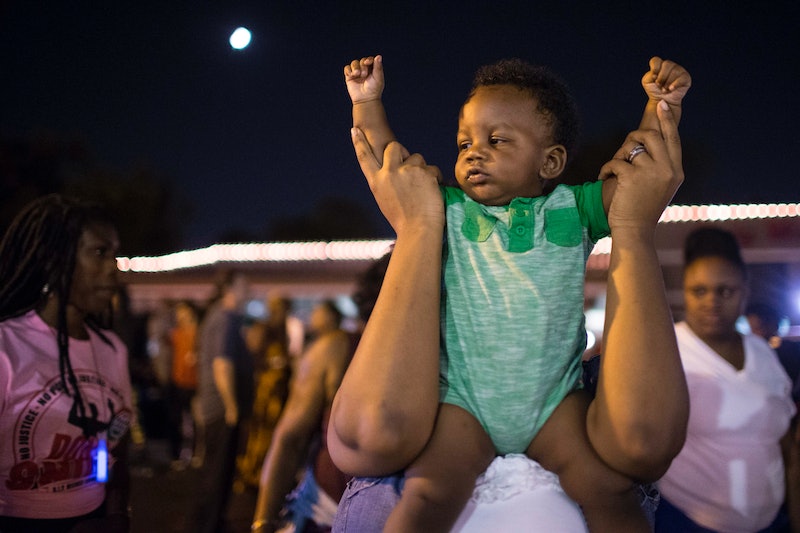 No, the unrest sparked by the shooting of Michael Brown hasn't yet died down — far from it. On Thursday, Ferguson police arrested 12 people, including CNN journalist Mary Moore, after protests erupted in the tense St. Louis suburb. As in the past, the charges are hazy, the police department is defensive, and the residents are angry.

It's been nearly two months since Officer Darren Wilson shot the unarmed Brown, and since then, the small town has seen protests erupt and die down, a police officer shot, a police chief apologize, and the Justice Department get involved to impose common decency. On Thursday night, the situation escalated once again as a couple dozen protestors marched and chanted along Ferguson's main road, stopping outside the police department. After ignoring a police officer's demand that they quiet down, the group was broken up, and at least six people — Fox2Now puts the number at 12 — were arrested.

"Anybody who uses language that incites violence will be arrested," the police said, according to a tweet sent by Patricia Bynes, a Democratic committeewoman of Ferguson Township. Among those hauled away by the police was Moore, a freelance journalist who's worked for CNN. According to witnesses on Twitter, Moore was only filming the goings-on at the time. Said Bynes to the Washington Post:

What a remarkable display of making your own rules as you go. They took the journalist who was doing her job and wasn’t involved.

Excessive police force has become a trademark for the Ferguson police department. In fact, just this week, the St. Louis County Police Chief, Jon Belmar, admitted that several officers had mistakenly arrested peaceful protesters who'd been demonstrating during the day, because of a miscommunicated "five-second" rule. (These arrests happened back in August, when the tension was at its highest.) And the Huffington Post recently reported the case of Richard Halliburton, an activist with @AnonCopsWatch, who allegedly got arrested for simply "loitering" and recording the cops' activity last weekend. As he told HuffPo:

I'm a live-streamer, so when the police ask us to do something I comply with every move because if I'm in jail I can't get the word out about what's going on out there. I believe I was targeted for being a live-streamer. They said everyone has to keep moving. I don't even think it was a second from when the cops said that from when they arrested me.

Jail support was notified immediately, but they were blocked at every turn when it came to posting my bond. They were told I had no bond. At about 9 p.m. they changed my bond to $300. By that time a police officer had been shot and there was no one to take my bond, so I just had to sit and wait. Then finally around 1 a.m. they got a call from the chief to let me go. I had no paperwork. Jail support brought me back to my car.

One thing that's for sure? The police department isn't doing itself any favors.